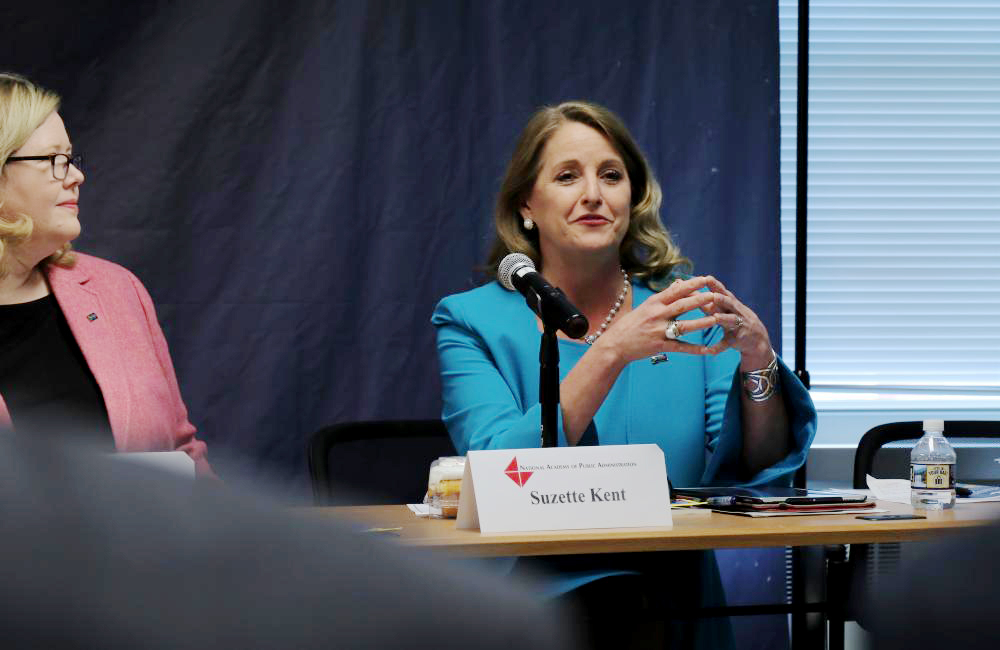 Marking the one-year anniversary of the President's Management Agenda to modernize and streamline the federal government, leaders from the executive office are steadfast in working toward several initiatives in workforce recruitment and acquisition processes, with further updates still to come.

"IT modernization is something that everyone knows is important. The technology is awful," remarked Margaret Weichert, deputy director for management at OMB and acting director of OPM.

Technology is one of three drivers for bringing change in the federal government, as outlined in the PMA that was launched last year in Kansas City, Missouri. The other drivers are data and workforce.

One initiative is looking into the technology modernization fund to match IT funding with actual IT needs.

Those needs led the OPM to also look at the centers of excellence, "looking at how do we connect the dots around funding and the way technology projects actually work, which don't fit neatly into one-year appropriation cycles and actually need more flexibility," Weichert said at a National Academy of Public Administration panel in Washington, D.C., Wednesday.

Another initiative is to retool the workforce. Citing efforts to digitize paper-based processes across the departments of Labor, State and Homeland Security, Federal CIO Suzette Kent noted some challenges in doing so resided not just in the technology itself, but also in making sure personnel were adequately prepared to maintain and grow those tools.

"We needed the skill sets inside the agency to sustain those new technologies as we roll them out to make best use of what we can do with the cloud," said Kent, in reference to email modernization efforts across the Defense Department.

In cybersecurity specifically, it takes getting more creative to recruit that expertise, said Kent. But it's not easy. Currently, there are no job codes for those workers, Kent said, especially as the fast-pace movement of the technology industry is very often where those types of emerging roles will arise.

Procurement contracts will also come into focus, said Weichert, adding that procurement professionals should be empowered to use technology through data to save more money. Weichert said her team is working on a modernization program for acquisition, updates for which will be discussed over the next year.

In the next couple months, there will also be announcements regarding a competition to bring academia and the private sector to apply lessons learned to government. Called the Government Effectiveness Advanced Research (GEAR) Center, such a partnership would allow government agencies to find new ways to test and learn technologies at a faster pace.

The General Services Administration is looking into various technologies such as robotics processing automation to get 24 multiple award schedules consolidated into one, in an effort to modernization federal acquisition, noted the agency's Administrator Emily Murphy.

"The broad scale use of automated technology should be something that is standard and common in all agencies, not an experiment," added Kent.

In the next several months, further information about the executive office's proposal to integrate OPM's functions into GSA and other agencies is also expected. Under the proposal, some provisions of which would still need Congressional approval, administrative services like human resources and IT would be done through GSA acting as a shared-service provider, Weichert said.