What can be done to help the government reach the innovation community? 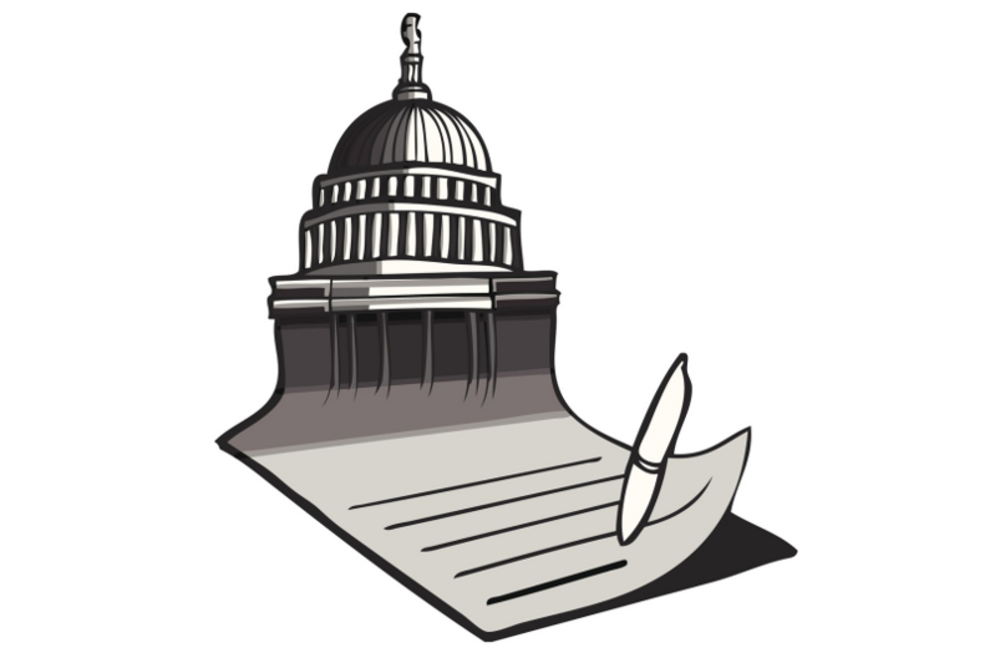 This column has been reposted with permission from Eastern Foundry, which originally published it April 26. This version has been edited for style and length.

Welcome to our seven-part series on why startups don’t bid on government contracts. Along with our partners at the Boston Consulting Group, we interviewed 109 organizations made up of startups and venture capital firms to discover the deterrents, and identify the ways in which the U.S. government can take action to lower the barriers to entry for startups and nontraditionals to the contracting community.

Throughout this series, you will find survey data and quotes from startup founders that paint a picture of today’s contracting landscape, and the uphill battle these technologists face daily to try and make their country a better place.

Today’s pace of technological advancements is astonishing: Self-driving cars are beginning to roam our streets, drones are being used as delivery mechanisms, the Hyperloop is becoming a tangible entity, the public is truly excited. Think back, when’s the last time the public was excited about and followed a government technology project? The Kennedy-era space program, the exploration of the human genome? Whatever your answer, I think we can all agree the government no longer has the public’s imagination and interest when it comes to matters of technology and innovation.

Unfortunately, when America’s best technologists aren’t interested in government projects, and generally aren’t even aware of them, the whole country falls further behind strategic rivals that do value technological innovation. In this post, we will use the data and comments from our survey to explore why the government isn’t effectively reaching the innovation community and what it can do to change this.

The Problem: Preaching to the Choir

While it may seem unbelievable to those of us who live in metro-D.C., most of the country doesn’t check FedBizOps each morning and they definitely don’t read testimony from the House Armed Services Committee with a cup of coffee in hand. Yet, FBO and other “insider” channels remain the primary ways the government communicates its needs and the opportunities to sell to it. 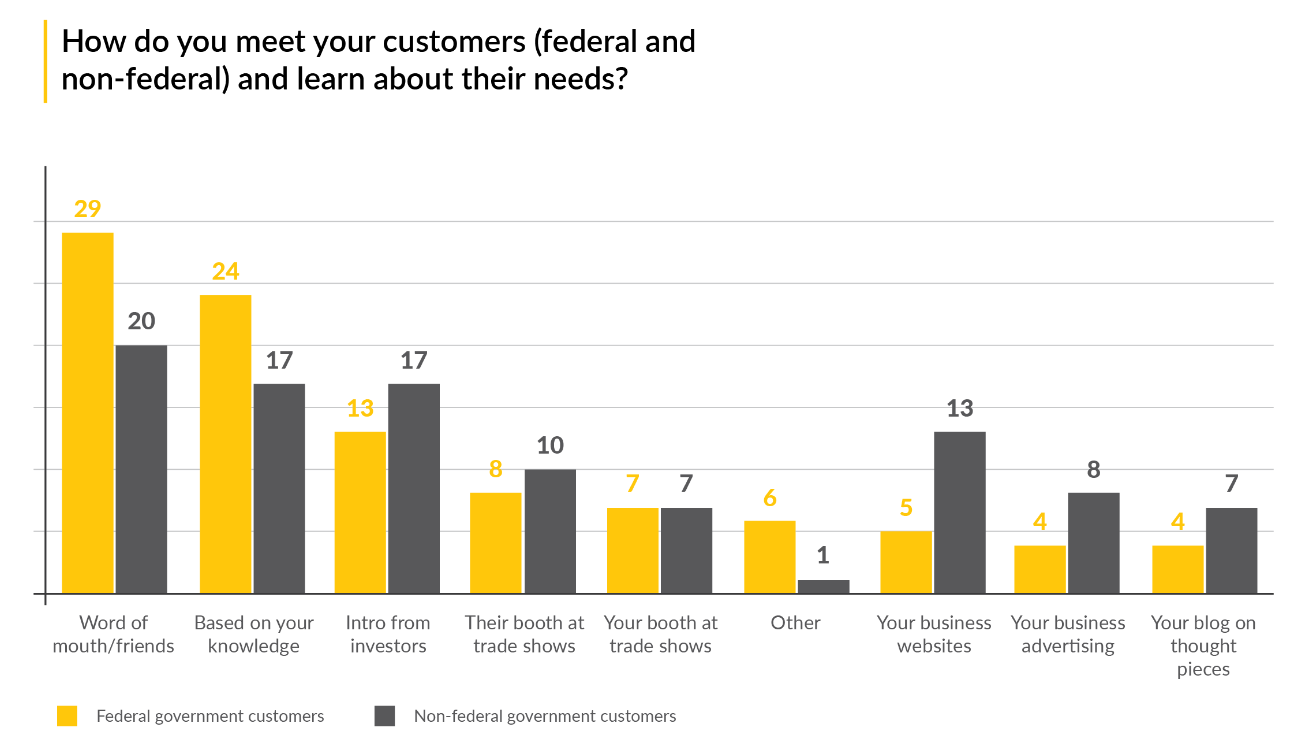 This wouldn’t be a problem if there was strong cross-pollination between federal and nonfederal buyers and sellers so awareness was transmitted, but instead we found the opposite. According to our survey, there is strong market clustering, which is not surprising. It takes significant time and resources to build the corporate capabilities needed to pursue any customer type and small businesses are tremendously capacity constrained, meaning whether they invest in pursuing the federal or another market, they are unlikely to have the resources to pursue the other. 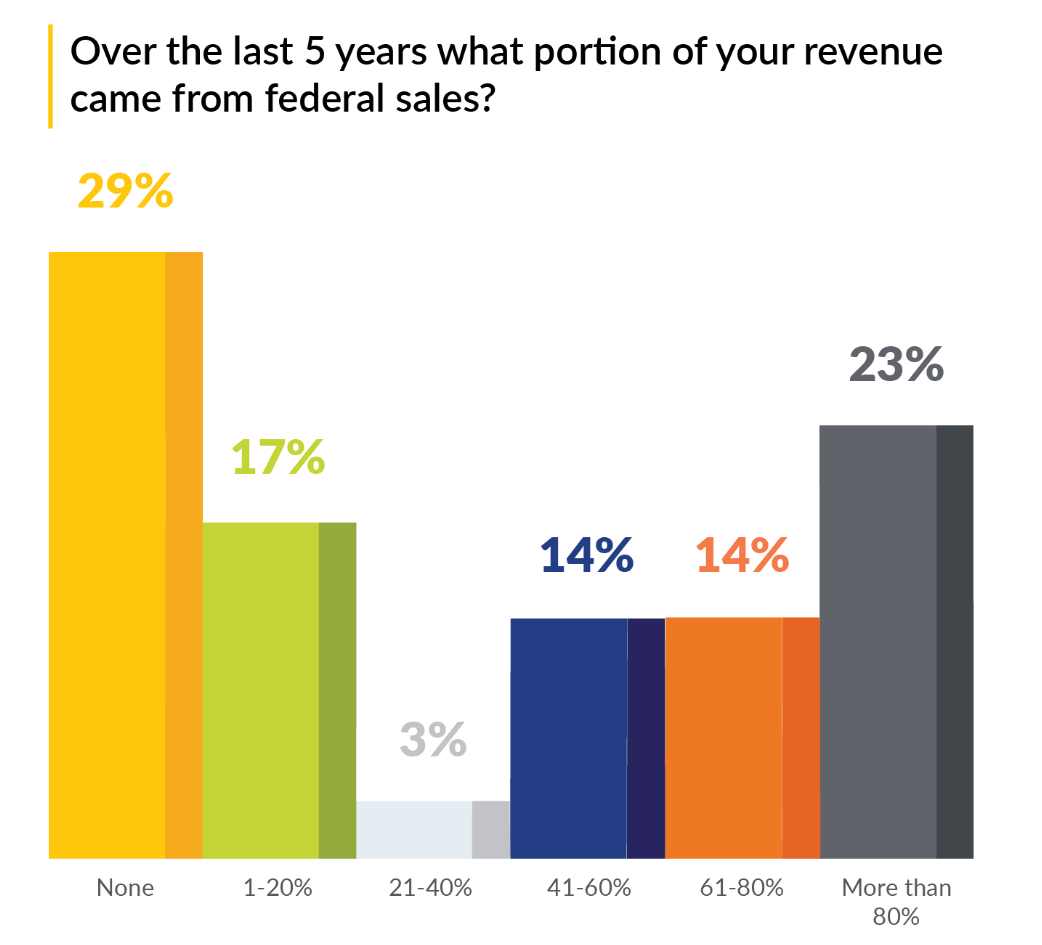 So if you don’t know any government-oriented individuals, and aren’t already in the government space, you’re unlikely to become aware of government opportunities.

Additionally, we found even businesses actively interested in federal opportunities don’t go to the “correct” channels (FBO.gov) and instead go to agency websites, or to people they have met. Interestingly, we found there is a relatively narrow window of development when companies do go to FBO.gov between the $1 million and $10 million revenue marks.

While our data did not identify why mid-maturity companies go to FBO more than others, after follow-on conversations, we believe mid-maturity companies have had enough success in their first market and want to grow so they use the low-cost federal options (FBO and agency websites). But by the time they reach $10 million in revenue, they have stopped checking FBO and have instead shifted to more expensive options like using outside consultants and direct engagement. 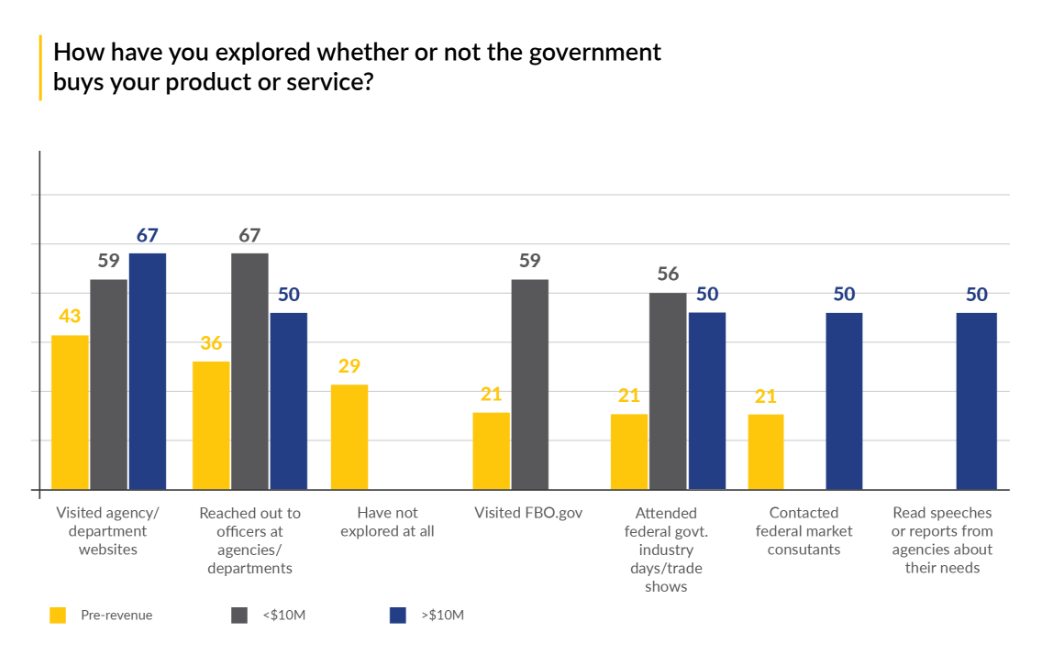 Solution: Go Where The Startups Go 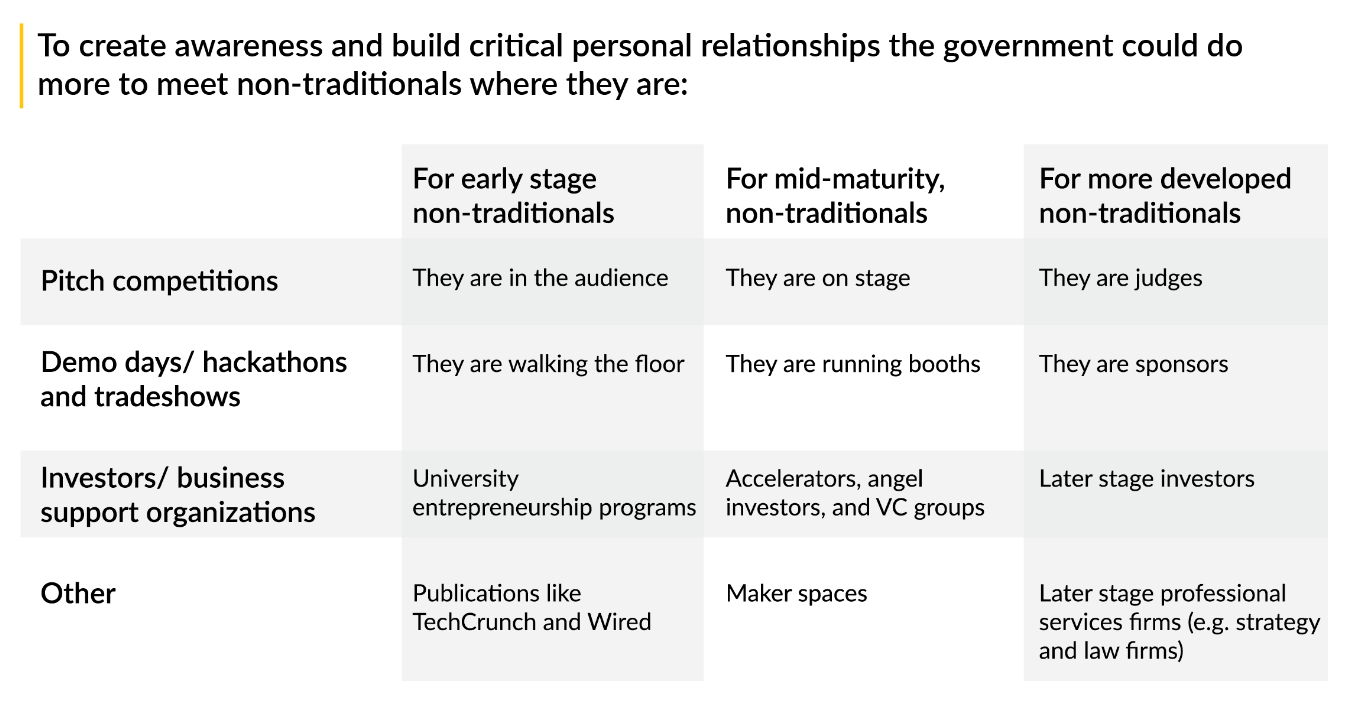 We received a lot of comments, a rare luxury for survey writers, and while there were a few strong themes, perhaps none was stronger than the frustration with how the government actually articulates what it's buying. This may sound like petty criticism of writing style, but it is actually critical for at least two reasons.

First, even a modest government solicitation frequently clocks in at over 200 pages, and while veteran contractors will quickly turn to the Statement of Work and evaluation criteria to make a go-no-go decision, nontraditionals make the forgivable mistake of starting with page one and reading from there. In follow-on conversations with nontraditionals, many shared experiences of getting excited by a federal solicitation with promising titles. Later, they became more and more demotivated after dozens of pages of progressively denser compliance language.

If the government wants nontraditionals to engage, we recommend writing in plain English and separating the substantive needs from the administrative compliance sections to reduce the intimidation factor.

Second, many comments requested the government focus on what it needs and why it needs it, rather than how it wants the need met.

For example, if the government said it needed to reduce the expenses of replacing helicopter blades in Afghanistan, then a wide variety of companies could respond (those with new materials solutions to prevent them from breaking, those that measured blade strength to reduce the number of unnecessary replacements, companies with ideas on the replacement process itself). Instead, government solicitations tend to be hyperprescriptive, specifying not just what the government wants, but exactly how the vendor will provide it, which almost always precludes vendors who have novel solutions.

In these posts, we intend to suggest solutions to any problem we identify, preferably ones that can be implemented without regulatory changes. Unfortunately, the solutions to this problem are broadly cultural, asking acquisitions officers to write in terms of outcomes rather than in terms of approaches, and would likely require changes to bid protest rules. As such, we do not believe the government will be able to change here and instead the best avenue for a solution is likely to outsource solicitation translation to a third party.

If you would like to read our full report, you may find it here, stay tuned next week as we tackle how the government can improve its marketing efforts. 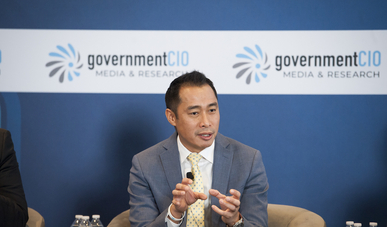