Who Are the Army’s Mad Scientists? Skip to main content

Who Are the Army’s Mad Scientists?

And how are they helping the Pentagon prep for the future? 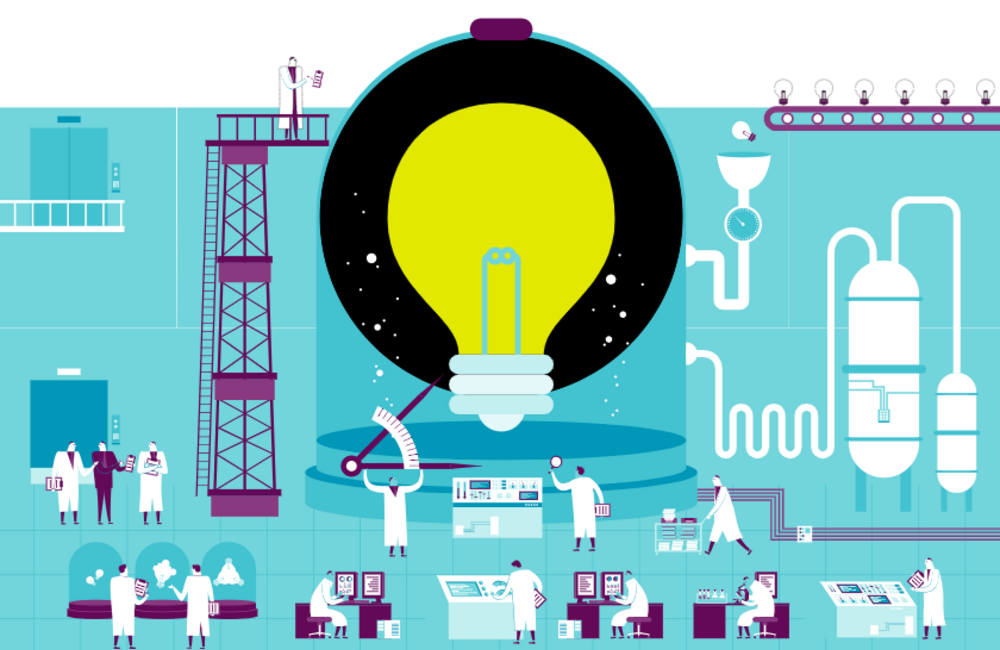 It’s one thing to stay on top of the newest technology trends, but it’s another to be ahead of the curve and anticipate the implications. That’s what the U.S. Army Training Doctrine Command’s Mad Scientist team is for. It’s a community of action exploring advanced capabilities to shape the future of multidomain operations and warfare.

The Mad Scientist Initiative explores the impact of disruptive technologies on the Army, like robotics, autonomy, artificial intelligence, cyberwarfare, megacities, biology, neurology and material sciences. It’s an ambitious objective for the small team of five, but the initiative’s network reaches much further.

The program has an All Partners Access Network community of action, a monthly online speaker series, themed conferences held at academic institutions and an online blog. The goal is to envision “the deep future of operational environment,” by connecting experts in various technological fields with the Defense Department.

“We’re a very small team,” said Lee Grubbs, director of the Mad Scientist Initiative. “It’s a mix of civil servants and contractors . . . and primarily what we are is a connective tissue between this community of action. I kind of think of it as a virtual think tank of individuals that are connected to us in different events and problems, challenges or opportunities that the Army or the Joint Force is working on.”

Grubbs is a retired military intelligence officer now serving as a civil servant. He said the initiative helps the Army think about what the operational environment will look like between 2030 and 2050. What are the technological possibilities by then, and the implications to security in warfighting? How will the Army have to be designed, equipped and trained to operate in that future operational environment?

These are the questions the Mad Scientists hope to answer. The program originally ran from 2000-2010, but ended because of  the continual deployments in Afghanistan and Iraq. In 2014, there was a need for the program to return as TRADOC began refocusing on the future of the Army and engaging in near and nonstate conflicts. So, in 2015, Mad Scientist relaunched with its conferences, network and later, its blog.

Since its relaunch, the initiative has held eight conferences, partnering with intellectual leaders and organizations within academia, industry and government. It had its Robotics, AI, & Autonomy conference in March at Georgia Tech to help the Army think about its robotics strategy and integrating AI into the future of the force. It’s also held an annual conference the past three years with Georgetown University broadly on the strategic operational environment and visualizing a multidomain battle.

This year, Mad Scientist has a conference on bioconvergence with research institute SRI International at its corporate headquarters in Silicon Valley, and plans to do a smart and future installations conference at Georgia Tech in June (Army installations help with readiness and provide secure facilities to support combat missions). This year’s event with Georgetown University will be on accelerated learning in 2050, what that means for the Army and how technology plays a part. Mad Scientist also has monthly online events, or “calls for ideas,” which Grubbs said is an effective crowdsourcing method and between the conferences, keeps the conversations going.

The conferences also aim to connect the Army and Joint Force expertise with the wider experts in academia, industry and think tanks.

“If knowledge is the currency of the future, the majority of this knowledge is outside the Department of Defense,” Grubbs said.

Allison Winer, the initiative’s deputy director, leads the engagement efforts within Mad Scientist. She’s in charge of connecting the Army and APAN to other experts, communities or events in the space.

“We connect with the experts in our nation and sometimes internationally on a particular topic,” she said. And depending on the topic, Mad Scientist will invite those senior leaders, general officers, industry, academic and think tank leaders who are major pathfinders on the topic — but may not have the Rolodex to contact everybody they need to know — to the events.

“With intention, we build the audience from the ground up, and we include those that actually work in the field,” Winer said. “So, it’s a big melting pot of everybody that needs to hear it.”

The events are invite-only, but because the conferences are unclassified, they are all live streamed, so anyone in the community can still participate. There’s even a moderated online chat to foster engagement and communication. About 125 are invited to attend, and an average 500 join online.

And having the recorded sessions posted online allows the team to direct the content and contacts to those who need it, especially if DOD is working on a similar project.

“That’s why I call it a community of action,” Grubbs said. “This isn’t a community of interest . . . the idea is that we are actively learning, actively connecting expertise within the DOD to outside DOD,” whether that be with industry, academia, or other governmental experts.

The Mad Scientist website features its blog and links to its YouTube site to view all past recorded conferences. The blog launched just two months ago, and internal Mad Scientist members all contribute, providing insight to the work the program’s done over the last few years at its conferences. Blog posts link to videos and conference reports and papers, but also new ideas and topics of interest. The program also welcomes guest bloggers, usually national and international experts, academic professionals, joint staff leaders and internal community members in the field.

The blog serves two major purposes: as a learning platform so the Army can benefit from all the connections Mad Scientist has, and as a crowdsourcing and peer-review platform.

“We encourage people to contribute ideas even if they are different than how we might be thinking about the future,” Grubbs said, to challenge these future possibilities. In the blog’s two months of existence, it has had about five guest bloggers with a series of others already planned.

Where Do These Topics Come From?

Most of the ideas, themes and topic areas stem from what the initiative and its network of experts believe the Army should be thinking about.

“I call it ‘on the cutting edge,’” Grubbs said, “so the sweet spot for Mad Scientist is to be early in the thinking on how a trend might affect something the Army needs to understand.”

For example, the conference on AI and robotics was nearly a year ago, and the papers published from the event are drawing more and more relevance today as the Army explores optionally piloted vehicles (a hybrid between a conventional aircraft and an unmanned aerial vehicle).

“We were early in that aspect, as we tried to ramp up the Army’s understanding about these key trends and the convergence of them,” Grubbs said.

They also work with the Army’s futurists at TRADOC to understand what exactly those topics and technology areas will be. Through its crowdsourcing network, conferences and larger community of action, Mad Scientist also receives ideas of what to focus on next.

For example, talks this past year around biology and its integration with AI led Mad Scientist to explore everything from human enhancements, the use of embeddables and wearables, biosecurity threats that can exist with the technologies surrounding gene editing, and so on.

“This explosion of biology will not be technology that’s only available to a few nation states, but will be widely available in the commercial realm; which means potential adversaries will have near equal access to the technology as we will,” Grubbs said. That’s what sparked the bioconvergence conference this year.

So, What’s The Outcome?

How do these efforts directly impact the future of the Army? Grubbs said it’s an innovation curve. The first thing people have to do before taking deliberate action is a set of trials to understand what exactly is discussed and how to move forward, especially in the early phases of innovation.

Take the future of installations conference this June, for example. Grubbs said this time last year, the Army came to the Mad Scientist team and inquired about multidomain battle, and strategic support ideas of how installations will support conflict in the 2030-2050 period.

Mad Scientist started the conversation by using smart cities as an analogy for Army installations. For the smart cities conference it held in 2017, the team invited key experts in the field, including engineers, think tank experts on security and government officials, and launched a “call for ideas” on the topic of future installations. After the event this June, the outcome of this year-long process will be a framework for what investments in installations will look like, and the pilots for building them. This is a process the team uses to develop Army strategies for all its topics, technologies and capabilities it discusses.

So, rather than thinking about technology that exists today and pushing it out to DOD, which other offices already do well, Mad Scientist is helping the Joint Forces think about the future, “so we can anticipate and align our organization for requirements and funding, to be able to get in front of the trends,” Grubbs said. “It’s really about building a future ready organization.”

The Army also published “The Operational Environment and the Changing Character of Future Warfare,” an assessment of five years of work involving elements of TRADOC and critical lessons, papers and ideas from the experts in technology and research in the Mad Scientist Initiative.

The Future of Mad Scientist

Last year, the team focused on energizing the initiative through its conferences and online events. This year, the focus is on the blog and trying to further its purpose and position. But in terms of the future, Grubbs said the team is exploring various ideas, like TED Talk-like microevents between conferences and the monthly online gatherings for quick, deeper dives into topics. He’d like to explore virtual gamification, and the tools for mixed reality, virtual reality and augmented reality.

Grubbs is also toying with the idea of having a Mad Scientist science fair, or even introducing a contrarian contributor to the blog to challenge the mainstream ideas discussed.

“We are continually focused on what we can do . . .  to improve the community of action, connect to new interesting smart people, and then to focus on army opportunities and challenges,” he said.

The initiative is on Twitter, and if there’s one thing Winer and Grubbs want people to know, it’s that Mad Scientist is open to everybody, not just those associated or affiliated with DOD. There are no barriers to participation, because this community is important and valuable to the future of the Army, they say.