Wearable Tech is Getting a lot Smarter, and Softer Skip to main content

Wearable Tech is Getting a lot Smarter, and Softer 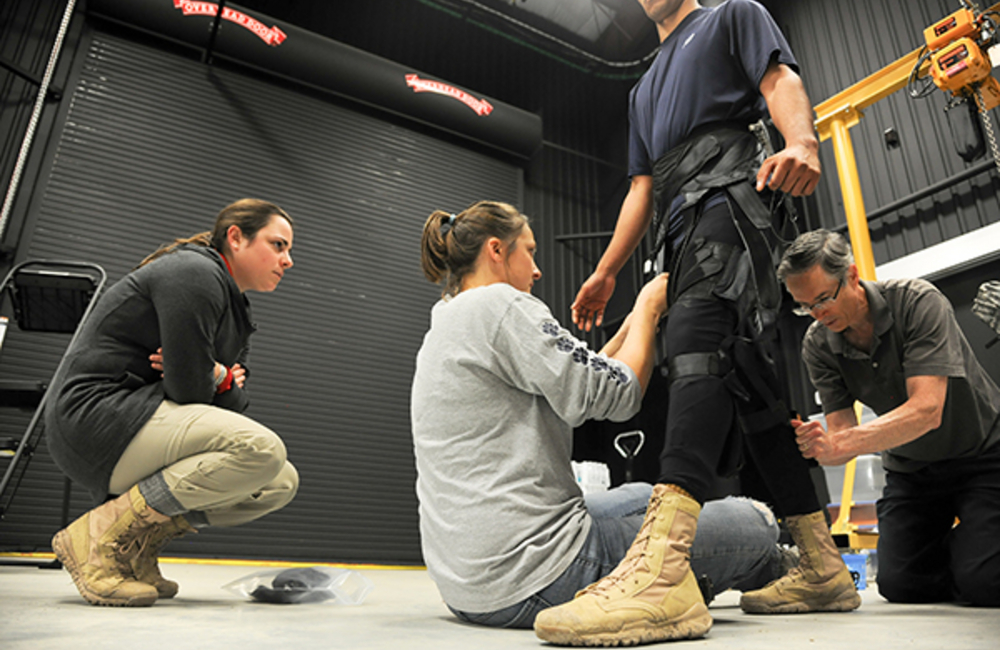 Wearable electronics aren’t exactly new. People keep smart watches on their wrists around the clock to monitor their activities, workouts and medical conditions. Other medical devices are increasingly common. Some folks probably still have a pair of Google Glass goggles somewhere in the back of the bottom drawer (and don’t look now, but it might be making a comeback).

But the next phase of wearable technology will be something you can really get into, in the shape of external-skeleton suits — for soldiers in the field or workers in the warehouse — as well as off-the-rack clothing whose very fabrics will warm you up, charge your smartphone, improve Wi-Fi receptions or monitor your brain patterns.

Some of these products might not be everywhere tomorrow, but new developments are bringing them closer to everyday reality.

Inspired by the external skeletons on arthropods like spiders and crabs, exoskeletons are wearable machines — with gears, pulleys and often computerized electronics — that provide support and strength to a user while usually providing physiological monitoring and feedback.

Research in this area has been pioneered by the Defense Advanced Research Projects Agency and its partners in academia and industry in order to develop an exosuit that can reduce stress and prevent musculoskeletal injuries while enabling soldiers to carry more weight over longer distances, while also improving their cognitive abilities. Working with Harvard University’s Wyss Institute as part of the Warrior Web program, DARPA has also developed a soft exosuit that will put a spring in the wearer’s step and even make them a better runner.

That same approach is being taken up by industry, in what is a burgeoning field, with no shortage of companies turning out power gloves, tool-holding devices, “chairless chairs” and full-body power suits.

Delta Airlines, in one example, is considering equipping some employees with full-body exoskeletons — reminiscent of the Power Loader in “Aliens” — to protect them from injury while allowing them to get more work done. Delta has joined the Exoskeleton Technical Advisory Group (X-TAG), which was formed in March by Sarcos Robotics and includes Bechtel, BMW, Caterpillar, GE and Schlumberger among its members. Sarcos makes a pair of battery-powered exoskeletons, the Guardian XO and XO MAX, that the company says take about 30 seconds to get into or out of. The XO can repeatedly lift and support up to 80 pounds for a four-hour stretch of work without causing fatigue or strain for the worker. The XO MAX can do the same with up to 200 pounds for eight hours.

The United Automobile Workers last year paid for four workers in the Michigan area to wear a vest made by Ekso Bionics to ease stress on the back and arms. Another company, SuitX, makes a lower-body suit to support the legs, and the company Lowes is testing exoskeletons for employees who stock the store shelves. The list goes on.

With apologies to the Marvel Universe, the brightest immediate future in wearable robotics might not be in someone flying around in an indestructible gold-titanium or Vibranium-Adamantium alloy or whatever, but in soft, flexible fabrics that you can wear like cotton.

Smart fabrics are already commercially available, including sports shirts that track location and performance and sports bras that monitor heart rate, putting many of the functions of a smart watch into clothing. But those products are just scratching the surface. Researchers are currently working on light, flexible and (as opposed to current exosuits) silent fabrics that could perform the same functions as hard-shell exosuits, such as helping people recover from injuries, run faster, lift more weight, or allow disabled people to walk again. Fabrics could convert the sun’s rays to keep you warm, charge a smartphone while it’s in your pocket, or record health metrics from a pair of sneakers.

The key to smart fabrics is in flexible electronics — thin-film devices than can do what previously required rigid structures did — which has proved to be difficult and/or prohibitively expensive in the past, but promises to revolutionize electronics as a result of recent research.

One approach is to embroider electronics into fabric, as Asimina Kiourti of Ohio State explains at The Conversation. The university’s ElectroScience Laboratory is working on polymer filaments that researchers call “e-threads” to add antennas and power sources that are both flexible and washable.

To date, the lab has come up with a smart hat that passively monitors brain signals for patients with Parkinson’s disease or epilepsy, shirts that can extend Wi-Fi range and bed sheets that will track an infant’s height while monitoring for childhood medical conditions. E-threads can be woven into fabrics using the same stitching machines used to put a name on a jacket and produce “embroidered antennas are lightweight and just as good as their rigid copper counterparts, and can be as intricate as state-of-the-art printed circuit boards,” Kiourti writes.

Swedish researchers are using cellulose yarn that converts energy into motion in fabrics that can help with medical uses. "Our dream is suits you can wear under your clothing — hidden exoskeletons to help the elderly, help those recovering from injury, maybe one day make disabled people walk again," Edwin Jager of Linköping University, told Scientific American.

Eventually, flexible electronics could bring an all new meaning to looking smart.