Denis McDonough discusses how VA will prepare for additional claims from the PACT Act after the bill is signed into law Wednesday.
Sarah Sybert 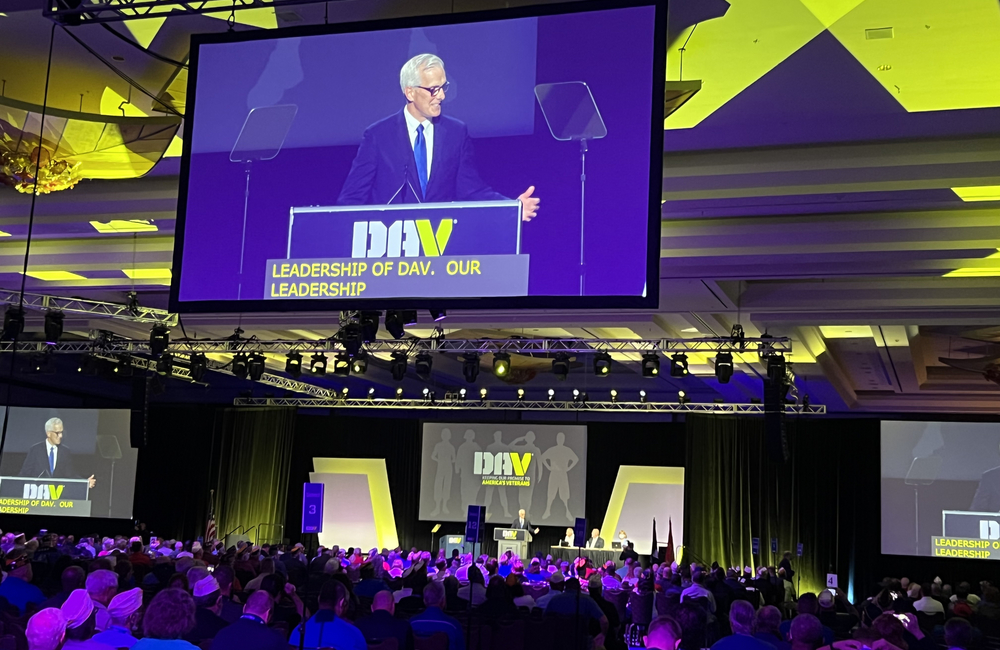 As the Department of Veterans Affairs prepares for new claims following PACT Act's anticipated signing Wednesday, Secretary Denis McDonough said the agency is honing in on automation and workforce recruitment and training to minimize additional backlogs.

“Since President Biden, we've delivered more care and more benefits to more veterans than any time in our nation’s history,” McDonough said at Disabled American Veterans (DAV)'s convention in Orlando Tuesday. “When it comes to delivering the benefits that veterans earned and deserve, we’re processing veteran claims faster than ever before, and we've worked together to get the claims backlog down to the lowest in years.”

“It's our job as a nation to provide those veterans, their families and their survivors with the benefits of care for those conditions, and that's exactly what we're going to do,” McDonough said.

To ensure VA is equipped to deliver new benefits and services, the agency is investing in its infrastructure and workforce, including modernizing the 31 new community-based outpatient clinics (CBOCs).

“This is perhaps the biggest expansion of veteran benefits in history,” McDonough said. “But, like anything else of this magnitude, implementing and executing won’t be easy.”

McDonough told GovCIO Media & Research in an interview that VA had already begun hiring processes in anticipation of the bill going back to September 2021. The agency has already hired around 2,000 employees at its benefits arm to be ready for claims as they roll in.

“We anticipate having to hire another couple of thousand of additional workforce at VBA. Then, we also have additional authorities in the PACT Act to hire personnel at the Veterans Health Administration,” McDonough said. “We need to expand the VHA workforce, and we will continue to expand the VBA workforce.”

VA will leverage lessons learned and data collected from its first round of hires in September 2021 to improve training.

"This is why we did what we did last year starting in September with the hiring pushes. One, we wanted to get people in chairs and trained — that's happening — but we also wanted to see how was the hiring process working? And we'll now learn from the experience we've had with these first 2,094 [new hires] as we double that probably in the next period," McDonough said.

“We will likely see challenges with timeliness because of just the sheer size and volume. ... The timeline is still working through the calculations, but I think it's probably going to take several years for us to try to get back to normal once we expect all these claims coming in,” Jacobs said.

“With the additional veterans now finally being recognized for their service, it may take us some time to get to get through all those claims,” McDonough told GovCIO Media & Research.

VA is looking to bring in more automation in claims processing to reduce backlogs. McDonough noted that projects on claims automation have had major successes and, in some cases, have cut processing times down from several months to several days.

“We shouldn't have to require [veterans] to go fill out additional paperwork, bring those papers in, we shouldn't have to go through big piles of paper, piece by piece. We should let the machines do that. Make sure that machines do well what they do, and then humans do well what humans do,” McDonough said. “Those are the three things we've done: hired people, we've improved the process itself, and we're automating the process.”

VA will also continue to improve and push messaging around the PACT Act and expanded benefits to ensure that veterans understand new claims that could be filed under the upcoming law, working with veteran service organizations (VSO) and state officials to ensure every veteran knows about and understands the ramifications of the PACT Act.

VA will begin processing PACT Act benefits for veterans and survivors on the earliest date possible, which is Jan. 1, 2023. To learn more about the PACT Act, visit: va.gov/pact or call 1-800-MYVA-411.