Tech That Will Power Tomorrow’s UAVs Skip to main content

Tech That Will Power Tomorrow’s UAVs 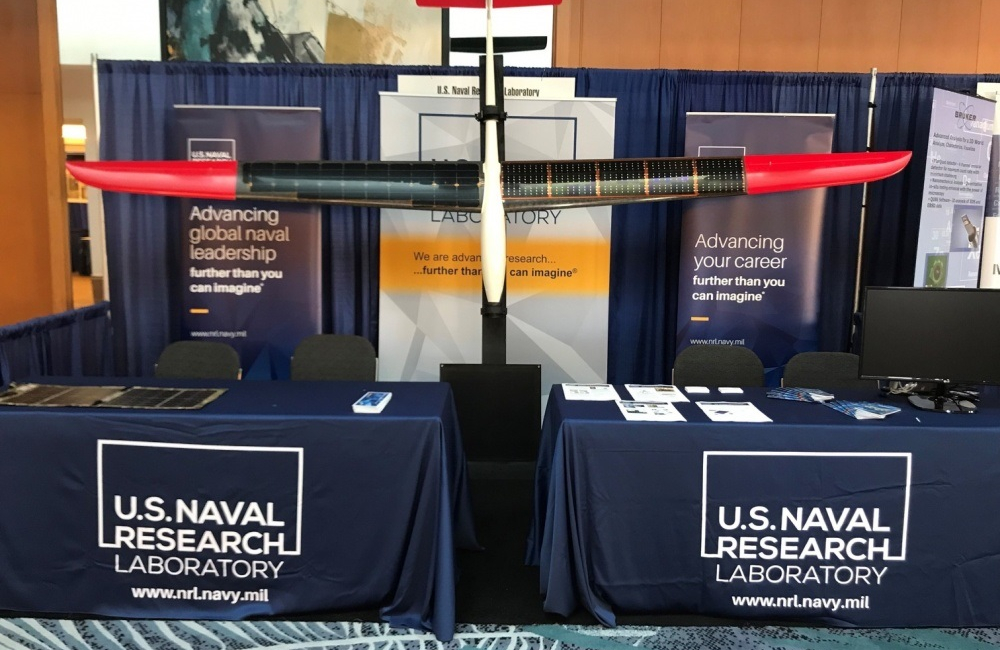 The Solar-Soaring UAV was on display during the World Conference on Photovoltaic Energy Conversion in Hawaii. Photo: NRL

If the skies of the future will be filled with drones, they at least might run on solar and a kind of wind power, consuming few resources while extending their flight times and leaving no emissions in their wake.

Solar-powered flying machines of one kind or another aren’t exactly a new idea. Solar, in fact, is old hat in space, where solar panels have kept satellites, Mars Rovers and the International Space Station in operation for years. The first solar-powered satellite, the grapefruit-sized Vanguard 1, went into space back in 1958 and transmitted data for about six years. It’s been space junk since 1964, but it’s still up there, 60 years after launch.

But solar panels don’t weigh anything in space, whereas on Earth they are quite heavy, a fact that has kept terrestrial solar-powered flight mostly on the drawing board — until recently. It’s now becoming a factor in the upper atmosphere, where companies are using lightweight solar cells and innovative designs that, combined with battery power at night, can keep high-altitude aircraft aloft for years.

BAE Systems and Prismatic, for instance, plan next year to test the Persistent High Altitude Solar Aircraft (Phasa-35) drone, a lean machine — it looks kind of like a Tim Burton stick drawing of the B-52 bomber — that could serve as a cheaper alternative to surveillance satellites, flying at altitudes of 55,000 to 70,000 feet. Titan Aerospace is developing an “atmospheric satellite” called the Solara 50, which the company says could fly at about 65,000 feet for five years.

And the Naval Research Laboratory is bringing the idea down a lot closer to Earth, tapping into both light and heat from the sun to extend the flight range of unmanned aerial vehicles.

The lab’s Solar-Soaring project is taking advantage of lightweight photovoltaic technology and innovative guidance algorithms to let drones fly longer, more efficiently, and in terms of style, more like some birds do. Researchers have developed a couple of what they call “endurance enhancer technologies” that have allowed drones to stay aloft for more than 12 hours, thanks to the sun and heat in the atmosphere. They use the sun’s energy to power the craft and, like hawks and vultures, can ride thermal updrafts, letting the rising heat do the work of flying.

Sunlight is Lighter Than Air

The research addresses an obvious need concerning unmanned aerial vehicles — that the weight of their fuel sources limits their flight times and ranges.

“One of the common complaints that we hear across industry and the warfighters is that they want aircraft to fly longer,” Dr. Dan Edwards, senior aerospace engineer in NRL’s Tactical Electronic Warfare Division, said in a release. “One great way to do this is to capture atmospheric wind energy or solar energy to extend the endurance.”

In terms of increasing a drone’s endurance, direct solar is the biggest piece of the project. Photovoltaic technology over the last decade has improved to the point that solar cells, the semiconductors that convert light into electricity, have become practical for aircraft, even close to the ground.

But the most innovative part of NRL’s research is its use of guidance algorithms to teach an autopilot to exploit thermal updrafts to get up and around, in the manner of some large birds. The common turkey vulture, for example, is not the handsomest of birds, but it is probably the most efficient flier in creation. After few flaps out of a tree, it will catch a thermal and ride it up hundreds of feet without ever moving its wings, then hold steady while cruising the currents, looking to catch a whiff of a dead mouse under a pile of leaves, or whatever.

Solar Power From Ground Up

It’s that kind of efficiency NRL brings to unmanned aircraft.

“Sunlight heats up the surface of the Earth, which in turn heats the lowest layer of air,” Edwards said. “That warm air eventually bubbles up as a rising air mass called a thermal, which the airplane can use to gain altitude. It’s indirectly solar powered.”

Researchers applied special sensing and guidance algorithms that enable the drone to detect a thermal updraft, then circle in its rising air.

The aircraft will still have a battery, but it will be smaller than they currently need, with the option to switch to the battery when solar power is not available.

“Between the two, you have the most robust energy harvesting platform because sometimes you’ll be able to soar and sometimes you won’t have the solar, and vice versa,” said Phil Jenkins, head of the Photovoltaics Section in NRL’s Electronics Science & Technology Division.

The Solar-Soaring technology would be suitable for a pretty wide range of aircraft, NRL said, working with platforms ranging from the RQ-11 Raven to big birds like the Predator/Reaper UAVs. The Raven is a smallish (4.5-foot wingspan, 4.21-pound weight), hand-launched drone that typically flies at altitudes between 30 and 152 meters. Its flight time is limited to about 80 minutes, with a range of about 10 kilometers. Predator/Reapers have lengths ranging from 27 to 36 feet, wingspans from 48.7 to 66 feet, and depending on model, can stay aloft for 30 or 40 hours. The MQ-9 Reaper/Hunter Altitude, for example, flies at 25,000 feet, with a range of 400 nautical miles.

Both could benefit from Solar-Soaring technology. And if it becomes established in the military, it’s conceivable it could be passed onto other agencies — say, the National Park Service, the U.S. Geological Survey — as well as being applied to commercial uses.