You’ve heard of “Shark Tank,” where would-be entrepreneurs with great ideas compete for cash before a cutthroat panel of investors and business titans. But what if that panel were not only interested in the bottom line but a sustainable future for the planet? That’s the idea behind Piranha Tank, whose mantra is profit, planet, people.

Piranha Tank was founded in December 2014 to connect capital investors with budding startups, to spur innovation and business growth in the Washington, D.C., area. In 2014, venture capital investment in the D.C. area hit a record $48 billion and that number has continued to rise since.

Cory and Tonika Myers, a husband-and-wife team of entrepreneurs, tried their luck in the Piranha Tank last year. Since founding their company Baggio in 2014, the couple has been pitching and seeking licensing partners for their smart bag that helps busy parents remember crucial items. 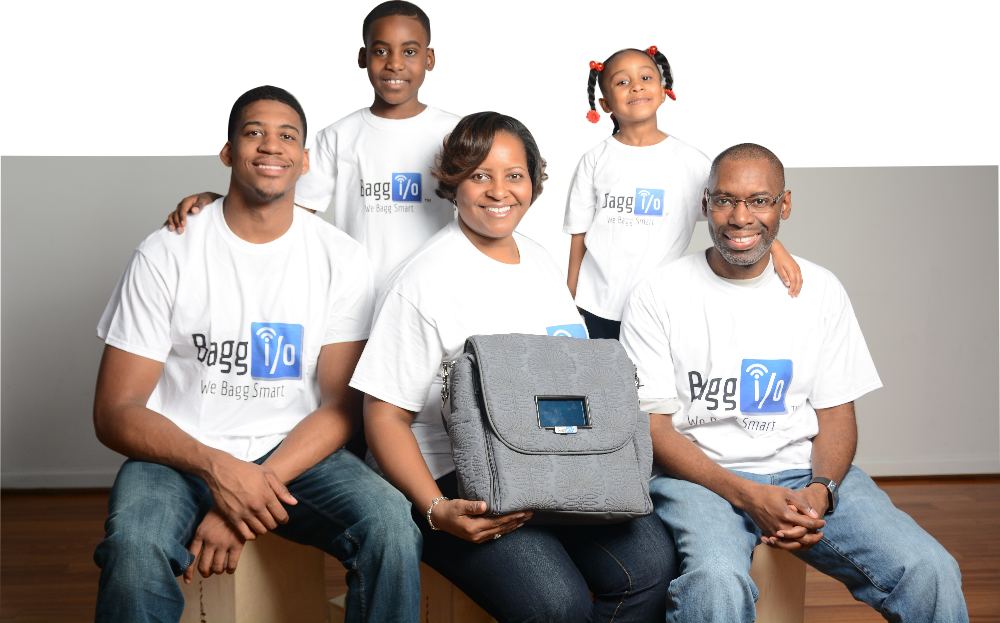 Cory and Tonika Myers, pictured here with their family, founded Baggio in 2014.

In January 2015, they won the AccelerateBaltimore competition, pocketing $25,000 in prize money and receiving access to mentors and advisers.

Their product was borne of a forgetful moment when they found themselves at a wedding realizing they had forgotten to pack diapers and wipes for their daughter. Or as Tonika puts it: “We forgot the Pampers and literally missed the entire thing.”

Later that evening, the couple searched on Amazon for products on the market that would prevent this from happening and remind parents when they’re low on diapers.

“I was sure there would be a smart diaper bag on the market, but there wasn’t,” Tonika says. “So, this was a golden opportunity for us.”

Tonika, an accountant, and Cory, an intellectual property lawyer, put their heads together and came up the idea for the Baggio Smart Bag. Connected to a smartphone app via Bluetooth, the technology alerts the user if the bag’s inventory is running low and sends information about the bag’s location if it’s misplaced or lost.

The patented system could also be used for high-value items in the military and emergency response, alerting users when an important product is missing from the bag, they said.

Last year, the Myerses took their idea to a Piranha Tank casting call held at George Washington University. They didn’t snag a deal, but it was a good learning opportunity, both said.

“We really valued the experience,” Cory says. “We pitched in a manner to attract to local investors and, quite frankly, the content of the pitch came out really well.”

Pitching to the Piranhas appealed to them because getting in front of local investors was “very, very attractive,” Tonika says.

What Piranhas Look For

“What catches my attention is self-awareness on the leadership team,” says Piranha Tank Co-founder and Chief Operating Officer Jennifer Rohleder. “They want to invest in the team because the product will probably change a million times. I want to bet on a winning team that can handle change.”

Rohleder says she became involved because her passion in sustainable and clean technology aligned with the Piranha Tank mantra. As an investor, the engineer-turned-attorney says she looks for thoughtful entrepreneurs who’re going to solve a problem and build a business around their idea.

Founders should understand their strengths and weaknesses, and that knowledge shines through the way you speak, whether you’re on stage or not, Rohleder says.

“It’s really hard to define, but I know it when I see it,” she says. “If you sound like a used car salesman, I’m not into it.”

Her best advice for pitching? Know your numbers.

“Definitely address the Piranha bottom line right on top, even if the Piranhas don’t probe you on it,” she says. “The single biggest mistake I see repeated is that people are talking too long about their backstory. But until you have a viable business opportunity, no one cares.”

An investor wants to know what the deal is, so get to the business proposition within your first 3 minutes of pitching, Rohleder said. You’ll need to answer questions like, What’s the actual deal? How big of an investment are you seeking? What’s the return on that investment?

“You can have the best idea in the world, but if you can’t execute, it’s worth nothing,” she says.

Sharon Tiger, one of the judges, agrees the narrative is important but scalability is crucial.

“Obviously, as an entrepreneur, you’re very passionate about what you do and what led you down the path to this idea and people care about that, but after they understand what it is you’re asking for and what the money will help you accomplish,” says Tiger, whose day job is as vice president of business development at Raffa Financial Services.

Tiger, who also serves on the Maryland Tech Council, says her task as judge for the casting calls isn’t so much evaluating business plans but figuring out whether the pitch actually has legs.

“Know your story and be concise,” she stresses.

Tiger recommends interested entrepreneurs to watch the Piranha Tank YouTube channel for the the dos and don’ts and even coming to the casting calls before they apply.

“I think doing that helps evaluate whether you want to do it and figure out what’s the best approach for you,” she says.

For the Myerses, the big learning experience has been getting more social with the local community. Tonika says they have have forged relationships within the Baltimore startup scene and received guidance from mentors. They've spent time thinking about the evolution of their product and how the West Coast might be in their crosshairs next.

As for best advice for their fellow entrepreneurs, the Myerses highlighted perseverance and putting in face time with others.

“Never give up,” Cory adds. “The right idea plus the right investor equal success.”

Piranha Tank has a rolling application process throughout the year. The next shows will be scheduled in 2018, but details have yet to be finalized.