NIST Wants Robots to Bounce Back from Their Mistakes

And it’s holding a competition with $17,500 in prizes for the best agile robot approach. 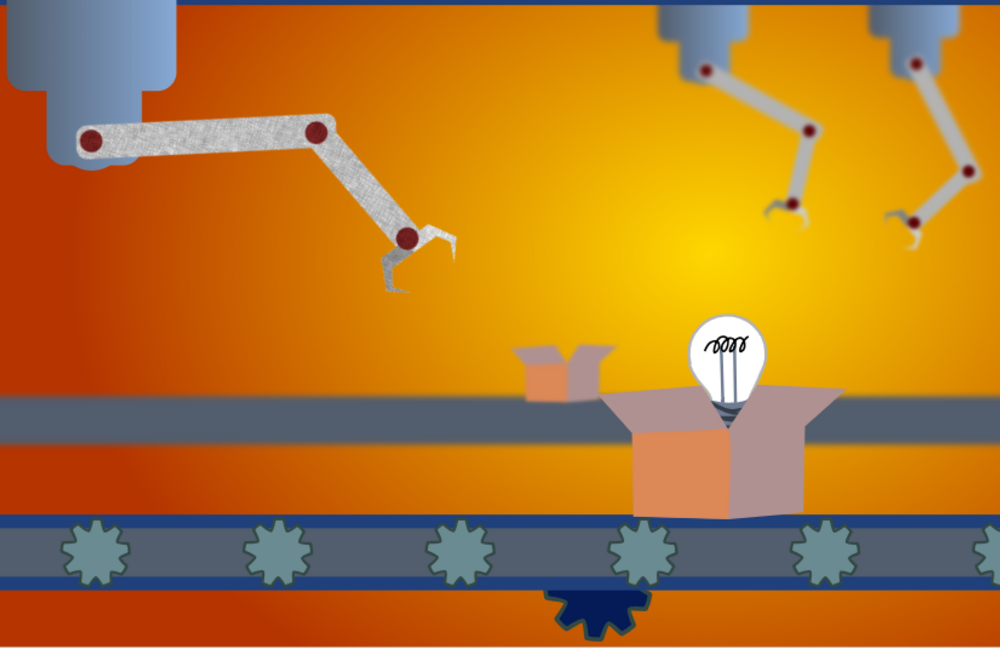 Industrial robots used in factories for repetitive, heavy-lifting tasks are great at doing the job they are programmed to do — but what happens if they drop an item, become disoriented or need to customize a product? In other words, can we make robots agile?

That’s a question the National Institute of Standards and Technology is trying to answer, and is looking for citizen-driven approaches to do so in its second Agile Robotics for Industrial Automation Competition, or ARIAC.

ARIAC is a “simulation-based competition designed to promote agility in industrial robot systems by utilizing the latest advances in artificial intelligence and robot planning,” according to the description. NIST wants to make robots more productive, autonomous and responsive to the needs and challenges industry shop floor workers face.

The success of last year’s inaugural ARIAC prompted this year’s continuation, and because the competition is completely virtual, participants do not have to travel. ARIAC 2018 qualifiers are expected to start in March, and the final competition will be in May.

Last year’s competition focused on pick-and-place kit assembly operations, a highly manual process of developing a kit of parts with robotics. This year’s topic is order fulfillment, a typical Amazon-type challenge, where a robot can find the product for that order and place it neatly in a box so it can be shipped. But many of the underlying challenges are the same.

Typically, robots used in industry and for large companies like automotive manufacturers are tasked with the same set of sequences over and over again, making hundreds of thousands of the same piece, or welding the same part. They’re good at that, but parts can fall out of robots’ grippers, processes can change and errors can happen.

Right now, that means shutting down the robot to reprogram it, a time-consuming task and factory line disruption.

“The competition is trying to get around that,” said NIST’s Craig Schlenoff. Among his many titles, Schlenoff is the associate program manager of the Robotic Systems for Smart Manufacturing Program and the Agility Performance of Robotic Systems project leader (the project in which ARIAC originated). He’s also a judge in the competition.

Making robots agile means being able to identify and detect when something fails or when a part drops, and adjust its behavior to complete the task even though its role shifted. Or, being able to customize products when needed without having to be completely reprogrammed.

To identify these challenges, NIST works with industry partners to discuss how they want their robots to improve. Rather than try find the solution, NIST invites researchers to find ways to address those challenges in the competition, connecting them with real-world problems.

“We spoke with [industry] and they gave us 36 unique robot challenges that they were trying to address, so we chose three of them for last year’s competition,” Schlenoff said. Those challenges were failing suction grippers, notification of faulty parts, and reception of high-priority orders that would prompt teams to decide whether or not to reuse existing in-progress orders. This year’s competition will include those challenges along with new additions.

NIST then develops a simulated environment it sends out to registered competitors, with a virtual robot control system and designated qualifier tasks that need to be accomplished. The first step for participating teams is to code a robot control system software and that can get through two qualifiers in the simulated environment. If they complete the qualifiers, they get to the final round in May.

“The qualifiers kind of get them familiar with the challenges that we have, and for us, makes sure that they’re serious about it and that they can perform at at least some level so they can participate in the finals,” Schlenoff said.

There’s an automated score generated by metrics built into the system, measuring things like how long it took to complete a task and if the task was successfully completed at all. Then, three human judges provide a score based on the novelty of the approaches taken and how well they addressed the industrial challenges.

Schlenoff is joined by two additional judges. This year, it’s Brian Gerkey, CEO and founder of the Open Source Robotics Foundation, and Clay Flannigan, senior manager of Advanced Robotics at Amazon Robotics. The final score is a combination of the two scores, and teams are notified a few days after the final competition.

Last year, winners were flown to a workshop. This year, NIST is awarding the first place winner $10,000, second place with $5,000 and third place with $2,500. Anyone can participate in the competition, but to accept the cash prize, at least one member of the team has to be a U.S. citizen.

Why “Outsource” the Research?

Government organizations have a limited budget, and NIST’s primary mission is performance evaluations and developing standards. It did develop the standards to address these challenges, but the research is not part of its core mission or budget.

So, these competitions serve two major purposes: It provides NIST with systems it can use to validate performance evaluation techniques it’s trying to develop, and provides a way for researchers to find solutions to true industrial challenges.

Last year, about 60 teams registered for the competition, and of those teams, 10 qualified for the finals.

“To be honest, the bar was set pretty low to qualify,” Schlenoff said. “They had to show they were serious about it, get the system running and do some basic operations.”

The registration numbers weren’t necessarily low, but Schlenoff said they lost many people along the way, so he’s hoping the cash prize will encourage more teams to move forward. Participation is critical to advance the state of the art of robotics and help industry be more competitive.

In the end, the winning approaches are shared with industry so companies can apply the solutions and techniques to their systems. Schlenoff is hoping to continue this competition, encourage new ideas from researchers and demonstrate the value in agile robotics for industry.