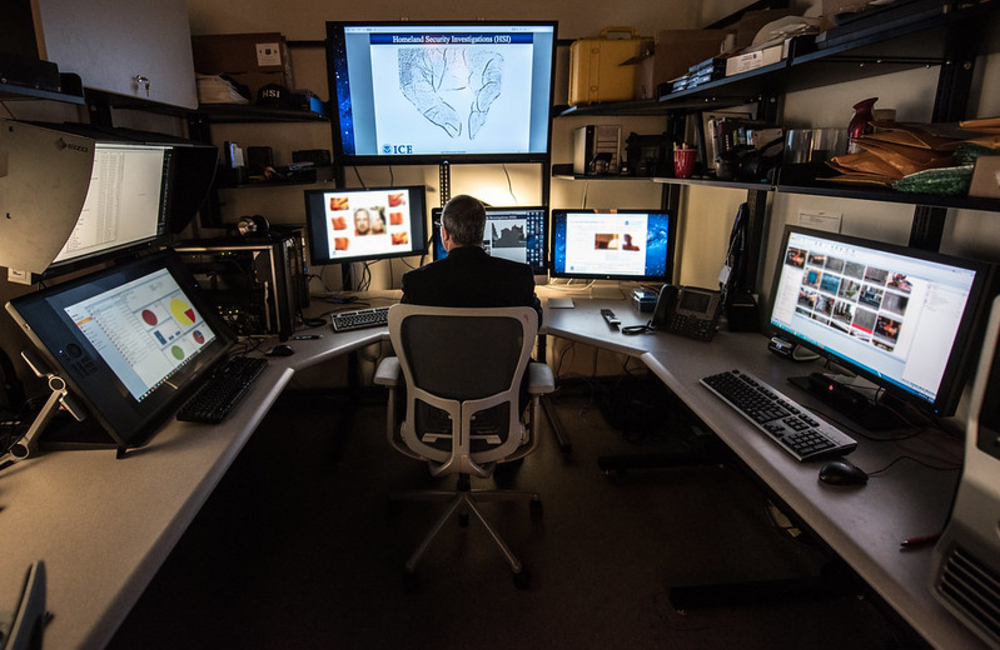 An ICE Cyber Crimes specialist works in a room that is setup to help identify child abusers and their victims. Photo Credit: ICE

U.S. Immigration and Customs Enforcement (ICE) has one of government's most difficult missions in protecting the country from cross-border crime and illegal immigration.

Complicating matters is the change in migration patterns in recent decades, with surges at the nation's southern border overwhelming ICE agents and case managers as well as Customs and Border Protection (CBP) agents.

Reasons for unlawful immigration have only grown increasingly complex as political and economic instability, crime, famine and natural disasters have driven hundreds of thousands of South and Central Americans north to seek better opportunities, but are unprepared for a complex immigration legal system.

This is where technology can drive positive and meaningful change to inefficient processes.

ICE CIO Rachelle Henderson wants to transform the agency into a digitally nimble, data-first organization that processes cases quickly and humanely. Specifically, she's focused on “aligning those critical capability gaps in which ICE needs to invest in order to evolve to that data-driven culture," she told GovCIO Media & Research.

She’s most excited about modernizing the core of ICE’s business, which entails transforming the paper-based "A-File" — "Alien Files" shared between Citizenship and Immigration Services (USCIS) to document full immigration proceedings — to fully electronic.

“As far as data interoperability specific to ICE and how we work in the immigration ecosystem … there’s been a big investment,” she said.

The entire process requires the timely and accurate back-and-forth transfer of data and excellent data interoperability standards and processes between ICE and other Department of Homeland Security agencies like CBP and USCIS, all of which have different but related missions.

One of the biggest problems with the paper-based A-File system is recurring gaps in the data flow between the three agencies. For example, if CBP notifies ICE to pick up a person detained by CBP and there is a two-day lag, then that person effectively doesn’t exist for two days according to the data. Sometimes a detainee is deported and then attempts to cross the border again, which may lead to a new A-File and thus inaccurate data.

The goal of data interoperability between CBP, ICE and USCIS is to show the full lifecycle of a detained individual and to track them as they move through the immigration system, avoiding a situation where there are four files of the same person with different ID numbers who may have already been deported twice.

All this is an enormous IT undertaking.

“This is absolutely huge because you can take technology and implement a solution, but if you don’t get the corresponding business process correct, you just get a slightly faster bad business process,” Henderson said. “You’re seeing USCIS, CBP and ICE on the operational side as well as the technology side work hand-in-hand to a fully electronic A-File. If it’s fully electronic, we can make sure those handoffs happen seamlessly. It’s better for our operations and operational efficiency, it’s better for our noncitizens and it’s just good government.”

Between all the data housed within CBP, ICE, USCIS, the Department of Health and Human Services, the Department of Justice's Executive Office for Immigration Review and the FBI, “we don't know what an individual’s immigration story is until you see the totality of the data, and that's hard," he said at the event. "An officer [is] encountering a lot of people across the border at a pace that's difficult for the officer to manage, so we're building tools to make it easy.”

Until 2020, ICE relied on paper spreadsheets and files to visualize migration patterns and push-and-pull factors as well as immigrant profiles, Kirby said.

The case acceptance program pilot allowed ICE visibility into some electronic A-Files CBP prepared for review with a reliance on DevSecOps processes. Looking ahead, Henderson wants ICE to continue to evolve and mature its business, governance and acquisition processes around Agile methodologies.

“Agile, DevSecOps — it’s been tremendously useful,” she said. “It’s critical to some of our successes. Where we need to go next is continue to mature. We’re not 100% there, some of it's based on technical debt and priorities, some of it is based on the need to continue to evolve our businesses processes.”

Cultural overhaul anchors Henderson’s plan. If she can get ICE agents and IT personnel on board with new business processes for accomplishing the mission, the technology and data interoperability pieces will fall into place.

“Agile isn’t just a technology term,” she said. “What I don’t want is Agile or DevSecOps to become this idea of, it’s just this technology thing. It doesn’t work without the business processes behind it.”

For Henderson, streamlining the immigration process for noncitizens and the agents handling their cases comes down to end-to-end electronic processes and transforming ICE into a data-driven organization. This will inform cultural shifts, technology pilots and innovative business processes under her tenure.

Henderson hopes this will drive positive change at the southwest border.

“When you talk about how we solve these problems, we’re going to solve it by making it electronic,” she said. “What we want to do is increase visibility.”