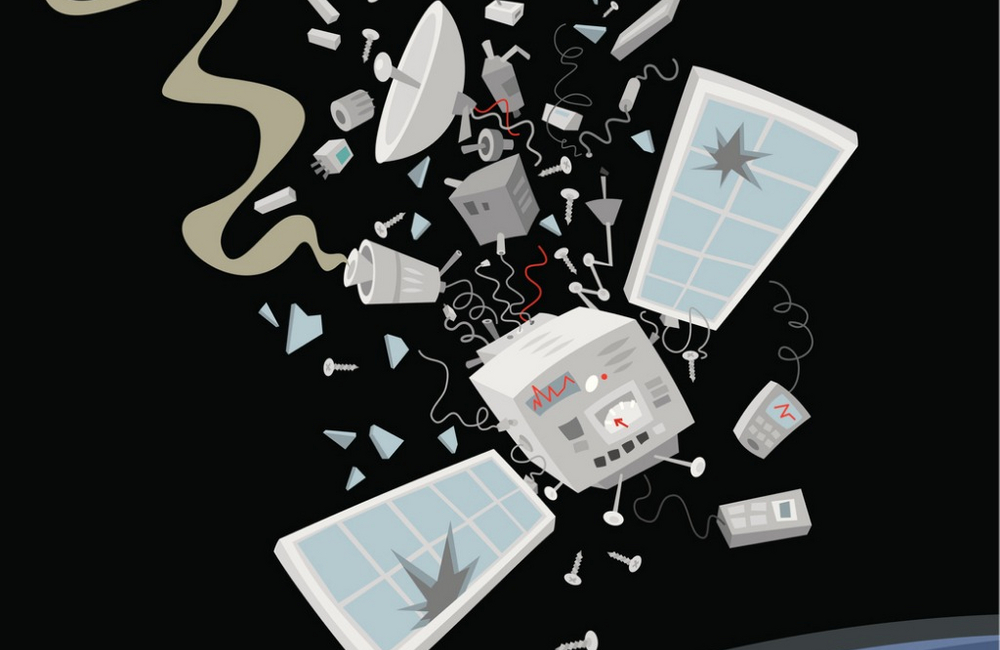 Space is getting crowded. There are 1,500 satellites in orbit, 20,000 pieces of space junk bigger than 10 centimeters, hundreds of thousands that are smaller, and companies like SpaceX with plans to add many, many more. So, with all that traffic moving incredibly fast, the U.S. is concerned about collisions that can cause a lot of damage (there was a crash in 2009 between a U.S. satellite and an inactive Russian spacecraft that created lots of debris).

And though the Pentagon tracks objects in space and warns satellite operators and international governments of possible collisions, it can’t order operators to move satellites out of the way.

So, during a speech at an annual space symposium, Vice President Mike Pence said the Commerce Department will start playing the role of “space traffic cop,” both to prevent collisions and promote the growth of the commercial space industry. In fact, Pence said the National Space Council developed the “first comprehensive space-traffic-management policy,” which is being sent to the president for approval.  The Washington Post

Was Your Internet Router Hacked by Russia?

On April 16, the U.S. and U.K. said the Russian government planted malware on global internet equipment, including routers, for political and economic espionage (or for future cyberattacks). The news came after a joint statement by the Homeland Security Department, the FBI and the U.K.’s National Cyber Security Centre. They said the main targets were government, private sector organizations and providers of critical infrastructure and internet services.

This Russian-sponsored cybermeddling has actually been reported by multiple sources since 2015, so the U.S. Computer Emergency Response Team said the U.S. and U.K. are confident of their accusations.

And because routers direct data across the internet, affected routers can be intercepted by “seemingly” trusted devices actually infiltrated by an attacker. US-CERT is stressing that those with affected routers harden poorly secured devices, and specifically cited Cisco’s Smart Install software. Time

Alexa May Be Upgrading — To a Robot

Well, we don’t know that for sure. But Amazon has been reportedly working on a home robot under the codename Vesta. Bloomberg sources said the company expects to start piloting it in employee homes this year to prepare for a consumer launch in 2019. We’re not sure what the robot can do yet, but apparently, Vesta has been in the works for years. This week’s buzz was sparked by a recent list of company openings, like “Software Engineer, Robotics.”

Breaking into the home robot market has been a challenge, aside from a few cleaning devices like the Roomba. But even the Roomba has implemented Alexa functionality, so it’s assumed Amazon’s famous virtual assistant will be a part of Vesta.

And Jeff Bezos is no stranger to robots, as he’s been seen hanging with Boston Dynamics’ SpotMini recently, and Amazon does have a robotics department focused on industrial warehouse robotics for internal use. But Vesta is a product of Amazon’s R&D center, Lab126, which produced the Echo. TechCrunch

Air Force is into Fast Prototyping for Space Systems

The Air Force Space and Missile Systems Center is part of a greater Air Force effort to speed up technology to the battlefield, and a review is in the works to reorganize the center as it oversees $6 billion a year in space procurement. Ultimately, SMC wants to get projects through a space industry consortium that has a $100 million budget to start prototyping technologies.

The consortium uses simpler contracting rules, so the Air Force will use Other Transaction Authorities for the development of new ground-control and data processing software for the Space Based Infrared missile warning system. The project is called the Future Operationally Resilient Ground Evolution, or Forge, and through the consortium, the Air Force is looking for proposals for mission data processing software applications for Forge.

SMC told contractors it’ll use an “iterative prototyping strategy” for Forge applications and data processing application framework. The center will choose three prototypes for the applications and three form the framework, and from there pick the contractor that develops the best prototype for each. There’s already talk of industry competition. Space News

Feeling Words on Your Skin

Facebook researchers are working on a device that could allow you to read incoming emails or text messages by feeling the words on your arm. How? It transforms words into real-life pokes.

The prototype looks like a cast and is worn like a one, but it’s filled with actuators that vibrate in patterns that match up with certain sounds when triggered to do so. Researchers taught participants in a study to feel different sounds that make up words, and after more than an hour of training, the participants were able to recognize 100 words. They were able to “read” words on their arm when researchers sent them messages.

This particular functionality could lead to a smart watch that delivers messages via vibrations without having to look down and physically read anything, or help with hearing and vision impairments to receive information easily. Facebook provided a sneak peek of the project before recent advancements and the study mentioned above, so it’s obviously improving. But if this device were eventually to hit the market, would people even use it as a communication method? It’d have to get faster, for one. MIT Technology Review