Hot Clicks: What You Missed at Collision Conference Skip to main content

Hot Clicks: What You Missed at Collision Conference

Rounding up tech-related news from one of the fastest-growing technology conferences.
Amanda Ziadeh 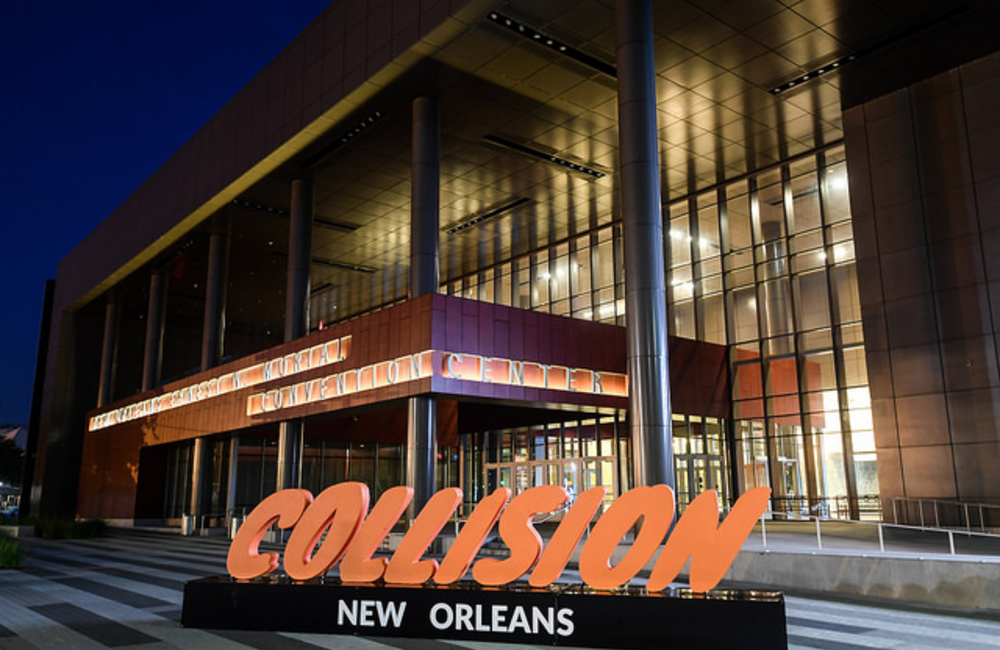 Photo by Stephen McCarthy/Collision via Sportsfile

The Collision Conference was this week in New Orleans, so we’ve put together a few must-read stories from the event:

The former U.S. vice president and outspoken environmental advocate took the stage at Collision to discuss the risk of climate change and global warming to the Earth, and how the tech community can help. He stressed change is still possible and relies on renewable resources, but we’ll need the political will and policy, technology, business and cultural changes to make it happen. So, he asked the audience to invest in renewable energy technology and pressure the investment market to follow.

Gore criticized recent political decisions and poor natural disaster response in an effort to stress the importance of addressing climate change, too.

“The investor community has an enormous role to play,” he said. The Advocate

In the realm of conference-related news, it’s worth to note Collision Conference will be held in Toronto in 2019, 2020 and 2021 after spending three years in New Orleans. Collision started in Las Vegas in 2014 and after two conferences, it headed to New Orleans for its 2016 event. And it’s quickly growing — in its fifth year, the conference has gone from 5,000 to an expected 25,000 attendees this week.

Canadian Prime Minister Justin Trudeau even welcomed the event with a personalized video message displayed on Collision’s website, as did the mayor of Toronto. But why shouldn’t they be excited? Toronto is already an up-and-coming tech and innovation hub. Not to mention, Collision is expected to bring 90,000 attendees to the city over the next three years with an impact of $147 million. Newswire

There’s also talk that one of the reasons Collision is moving is because of restricted immigration and travel to the U.S. Inc.com

Wouldn’t Be a Tech Event Without Robots

And Collision didn’t disappoint, check our tweets for proof! One robot in particular had its debut at Collision: Misty Robotics’ second generation Misty II. And the company announced it’s making 1,500 Misty II units you can pre-order over the next 30 days. Misty Robotics identifies its robot as an “advanced personal robot that’s easy to program,” and born from the spherical robot Sphero (creator of that "Star Wars" BB-8 craze).

The company said the limited-time sale is a crowdfunding campaign to provide consumers with a great deal and launch a new product, rather than trying to get backers to fulfill orders. Misty’s goal? Put a robot in every home or office, starting with developers so they can create applications and add to her pre-installed skills.

Misty II weighs 6 pounds, is 14 inches tall and has features to help it navigate around household environments. It has a 3D Occipital sensor for mapping, a 4K Sony camera for facial and object recognition and eight sensors to avoid obstacles. VentureBeat

Does Your Technology Control You?

It has crossed our minds, to be honest. A panel at Collision Conference discussed how social media sites and Google are introducing a new breed of addicts, and humans are forming a too-close-for-comfort relationship with their screens.

One of the speakers was Tristan Harris, co-founder of the Center for Humane Technology. He said his group is trying to reverse the “digital attention crisis” tech users face. He called technology the “largest invisible cultural and political actor in the world,” adding there’s a bunch of engineers on the other side of the screen creating the tool, so it’s really not neutral.

So, Common Sense Media founder and CEO Jim Steyer told the techie audience to think about the health and well-being of kids and families when developing, and consider the impact and reach of their products. It’s particularly influential to kids as they grow and learn, and the best thing to do right now is to just put their phones away.  Observer

Protect Your Constitutional Rights with an App

It’s no surprise companies are announcing new tech and tools at Collision, especially with an exhibition floor fueled by showcases. So, the Washington, D.C.-based Reyets, creator of a smart tech platform for civil rights information, announced the public beta launch of its mobile app at Collision. It provides real-time generated civil rights information based on the user’s geolocation, and is paired with video recording features to capture high-risk police interactions. It also connects people to a network of organizations, lawyers and media outlets so users can easily take action, and it’s free to download.

The tech also automatically backs up recordings to the user's cloud service and allows users to continually collect video and audio evidence, while also giving access to a database of answers to civil rights questions.

The unique idea was sparked by released footage of Philando Castile’s shooting in June 2017 in Falcon Heights, Minnesota. BusinessWire