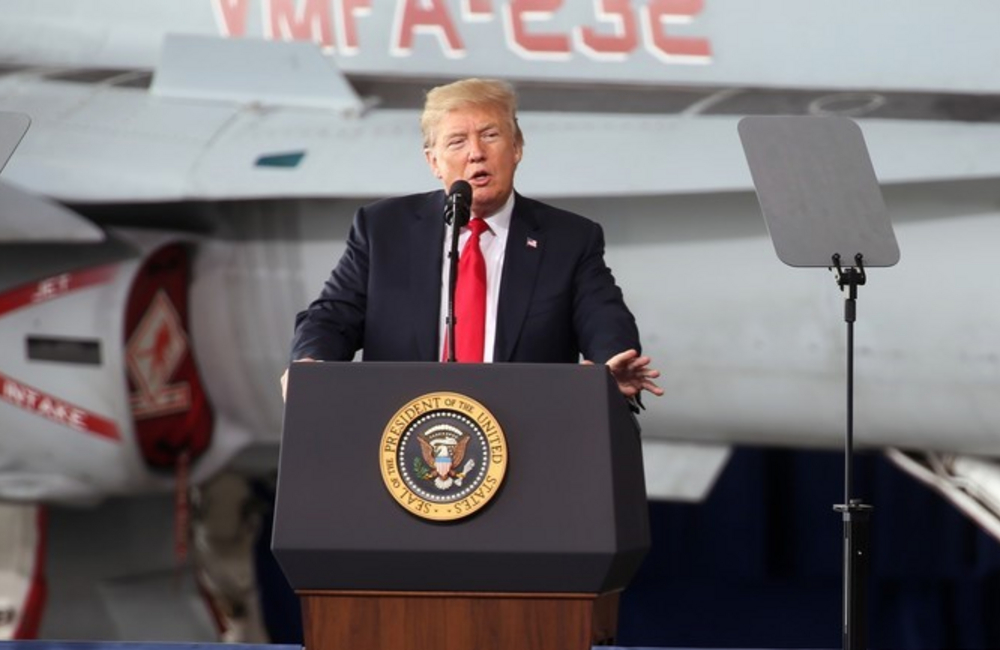 President Donald Trump is calling for a sixth branch of military entirely focused on space, and on June 18 directed the Defense Department to begin the process of establishing a space force during a meeting of the National Space Council.

Trump says it’s a matter of national security, as space is a warfighting domain like land, air and sea. If the space force were to be created, it would be the first military branch service addition in 71 years. But last June, when the House Armed Services Committee proposed the idea of a new branch of military called the Space Corps to fall under command of the Air Force, the White House, Air Force and Defense Secretary James Mattis weren’t convinced.

The legislation passed in the House, but the Space Corps bid didn’t make it into the final defense authorization bill — so what’s changed? Perhaps it’s Trump’s focus on defending America, which he says also relies on “American dominance in space.” He also encouraged the administration to embrace the commercial space industry, and is directing federal agencies to work with industry to implement a framework for space traffic management. CNBC, Space.com

In 2016, Apple refused to unlock the iPhone used by one of the attackers who killed 14 people in San Bernardino, California, but the FBI eventually paid a third party to hack into it. Since, law enforcement agencies around the country have been doing the same thing to get into locked iPhones they believe will help them crack a case — but not for long. Apple announced it is closing the technological loophole that let authorities hack into iPhones, and law enforcement isn’t happy.

Apple is planning a software update that will disable the phone’s charging and data port an hour after the phone is locked. So, phones can still be charged, but a person would need to enter the password to transfer data to or from the device using the port.

Law enforcement have been opening locked iPhones by connecting another device running a special software to the port long after the phone was locked, so this update would block that opportunity. But investigative authorities are angry. The Indiana State Police alone has unlocked 96 iPhones for cases just this year using a $15,000 device it bought from company Grayshift. Privacy advocates are on the other side of the debate, and it’s not the first time Apple has closed technology loopholes. The New York Times

Its name is iPal, it’s as tall as a 5-year-old, speaks two languages, gives math lessons, tells jokes, uses facial recognition technology, and moves and dances on wheels. iPal sells for $1,400 and busy parents in China are catching on.

The robot interacts with children through the tablet screen on its chest, and it’s even designed to act like a 4- to 8-year-old. It intends to provide lonely kids with company and education while parents are preoccupied, but adults can remotely talk to and monitor their children through the tablet screen via a smartphone app. Parents can see and hear everything going on around iPal, providing some peace of mind.

iPal was unveiled at the Consumer Electronics Show in Shanghai last week, and Tingyu Huang, co-founder of AvatarMind Robot Technology, said the hope is the child thinks of the robot as a friend or another child in the family. It’s not meant to replace parents, but lessen the burden. Shipping in China began in December 2017, and there are plans to release iPal in the U.S. later this year. Daily Mail

Austin is piloting a program that would give its 2,000 homeless residents a unique identifier recorded on the blockchain so all of their records are in one place, and they can easily find the services they need.

Service providers will also be able to access this information to communicate with and properly help the homeless community. This is just one of the many ways municipalities can take advantage of blockchain technology for city service delivery and operations. Because it is a secure electronic shared database of distributed ledger, it’s useful for anything represented digitally, like rights, goods and property. For cities, it can be used to create smart networks and grids, for more secure and updated voting systems, and even as a way to receive energy and build credit.

Smart-city tech and blockchain can be particularly helpful for populations struggling the most. Cities incorporating smart city infrastructure can collect, aggregate and analyze more data to improve the lives of residents and better direct services to areas that need it. Blockchain can even make microgrids happen, which would allow communities to more easily leverage solar power and sustainable sources, or join a power “exchange” where they sell their surplus of energy. In terms of building credit, the poor are most likely to have bad credit because of debt, unpaid bills or not using banks at all — but blockchain can be used to find an alternative way of building and tracking financial transactions. TechCrunch

AI Imagines the World Around It

DeepMind, the artificial intelligence leg of Google’s Alphabet, created a computer program referred to as a generative query network that can build a mental picture of the world around it on its own. The GQN vision system looks at a scene from various angles to describe what it would look like from a different angle, so it’s making sense of a scene similar to the way a person would (unlike most AI vision systems out there). And even if something in the scene is missing or obstructed, the program can reason about what’s there.

The system uses two neural networks; one that learns, and one that generates or imagines new perspectives. The team at DeepMind tested the method on three virtual settings: a tabletop, a virtual robot arm and simple maze. The GQN is able to capture different parts of a scene, like object shapes, positions and colors using a vector representation.

It still needs a huge amount of training data like other AI programs, and really only answers one query (what a scene would look like from a different angle). But still, this kind of technology could one day serve as the foundation for deeper AI where machines describe and reason about the world in a more sophisticated way. MIT Technology Review