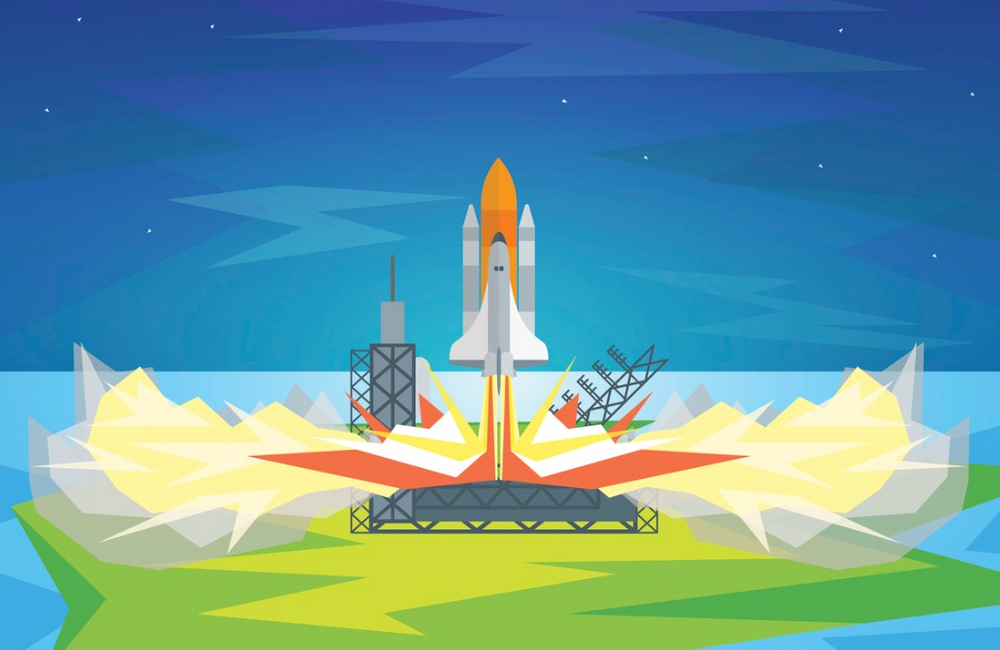 Well, he did it. On Feb. 6, SpaceX CEO Elon Musk successfully launched Falcon Heavy — “the most powerful operational rocket in the world by a factor of two” — from Cape Canaveral, Florida, the same launchpad at Kennedy Space Center that sent the first humans to the moon. Joining the rocket was a red Tesla Roadster with a dummy in the driver’s seat called Starman, wearing a SpaceX space suit, listening to David Bowie’s “Space Oddity.”

Falcon Heavy can lift 141,000 lbs into orbit, planning to one day take people to Mars. An estimated 100,000 people traveled to Cape Canaveral to watch the launch as the rocket’s 27 engines fired up and sent Falcon Heavy airborne. The side boosters returned to Earth in less than 10 minutes after liftoff touching down at the matching landing zones. However, the center booster did not make it to its pre-planned land zone, and instead hit the water at 300 mph. A small setback for an otherwise restored faith in U.S. space travels.

The launch was live-streamed, as was Starman’s view from the Tesla hanging out in space with Earth as the backdrop. The Atlantic

Your Apple Watch Can Detect Diabetes

With the help of artificial intelligence algorithms, digital health-tracking app Cardiogram found the Apple Watch can detect diabetes in those previously diagnosed with 85 percent accuracy. This was part of a DeepHeart study with the University of California, San Francisco that used data from 14,000 Apple Watch users. Cardiogram was able to detect 462 of them had diabetes by using the heart rate sensor on the watch, the same kind other popular fitness bands use.

People shouldn’t rely on their watches just yet, but if this helps to flag signs of diabetes, it could mean great strides for early detection. TechCrunch

Researchers led by University of Pennsylvania psychologist Michael Kahana demonstrated machine learning algorithms can be used to decode and enhance memory by triggering precisely timed pulses of electricity to the brain (wild). But because we can’t measure people’s brains from inside the skull in the name of science, Kahana and his team used data from electrodes implanted on the brain’s of 25 epilepsy patients intended to monitor seizure activity — but they were recording high-resolution brain activity during memory tasks.

The researchers were able to detect which brain activity voltage patterns were associated with remembering a word versus forgetting it. After collecting enough training data, they developed patient-specific algorithms that could predict which words each patient would remember based on electrode activity. And these electrodes can stimulate neural activity, too. So, the researchers prodded the brain to improve the formation of memories in real time. When a person saw a new word, the trained algorithm would decide if the brain was ready to remember it.

The algorithm could then trigger a stimulation, and the researchers found the system improved patients' ability to remember words by an average of 15 percent. Wired

Mining Bitcoin is Bad for Planet

Considering some have been referring to bitcoin as digital gold, if it were to actually replace gold as an accepted store of wealth, mining it would be environmentally tolling. According to blockchain consultant Alex de Vries at Digiconomist, mining bitcoin is at least 3.25 times more energy-intensive than mining gold (per dollar mined). And that’s if miners use the most efficient machines; if not, that number is closer to 6.91 with the use of old equipment.

De Vries found these numbers by comparing estimations on the energy intensity of gold mining to figures from his own estimate of bitcoin’s power consumption. Here’s why: Bitcoin is becoming less viable as an everyday currency because transaction fees and network congestion continue to climb. Instead of it being peer-to-peer electronic cash, some consider it a stable payment for alternative coins. In other words, bitcoin could have a future as a “gold-like digital store of value.”

But he didn’t address things like the extraction of materials to produce computer chips that mine bitcoin, or the impact of mining sites on communities around them. Bitcoin mining is still fundamentally different from gold mining, but it’s worth the thought. Motherboard

Ransomware and Cryptomining Had a Good Year

According to the “Malwarebytes Cybercrime Tactics and Techniques: 2017 State of Malware Report,” ransomware increased more than 90 percent in 2017, and the rise of cryptocurrencies has led cybercriminals to turn to cryptomining.

And, as most can expect, consumers remain a primary target of ransomware, and attacks against consumers rose 12 percent in 2017.

Hopefully, report findings like these can help increase awareness in 2018 and involve more C-level participation and advanced tech to protect consumers, according to Marcin Kleczynski, CEO of Malwarebytes. The company’s report also included some predictions of threats and trends to watch for in 2018, like the growth in the cybercrime industry and consolidated efforts to create more dangerous threats. But with this evolution of malware comes more user learning and enhanced security tactics. Forbes