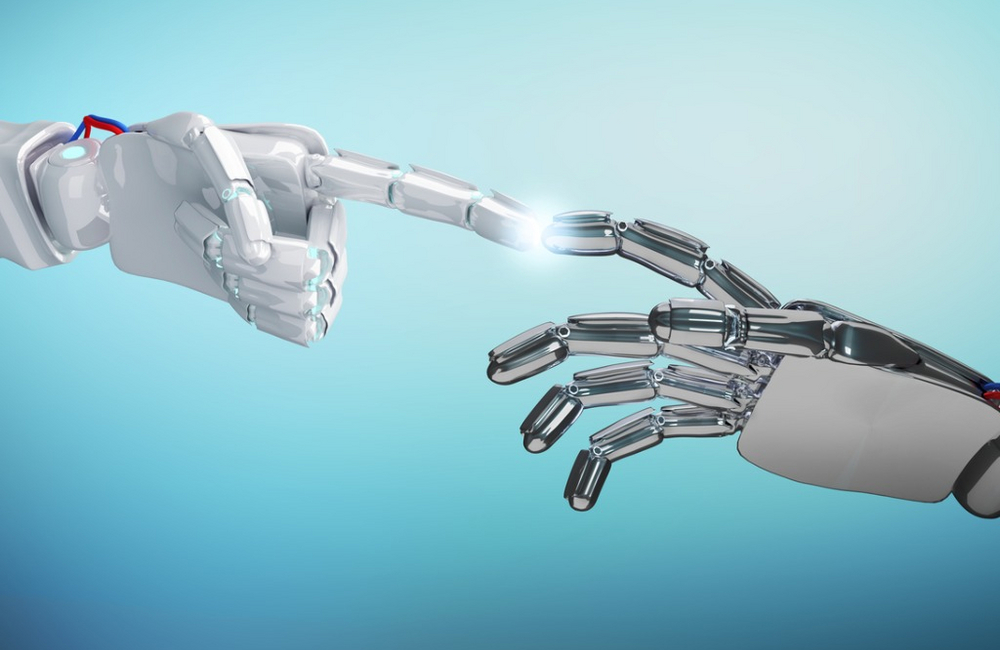 Boston Dynamics has a thing for quadrupedal robots. And while its four-legged robot dogs aren’t new, the company’s flagship robot, the SpotMini, can now open doors. The video shows the robot, which is about a meter tall, standing in front of a closed door. It appears to not know how to open it, so it looks around for help. Another four-legged robot comes around the corner and uses a fifth limb that extends from its back to turn the handle and pull the door open. It even holds the door open as the first robot walks through, then follows, as if saying “after you!” How polite.

The programming behind these actions are pretty complex, especially when you watch the limbs carefully and realize how particular the movements are to allow the robot the space it needs to open the door. The first robot even takes a good look at the door handle before deciding it cannot open it. SpotMini is actually a mini version of Boston Dynamics’ famous BigDog, a robotic pack-horse designed for the U.S. Army (which was ultimately rejected by the military for being too noisy).

There are plenty of videos of SpotMini and the case of the open door online, or you can watch the episode of “Black Mirror” called "Metalhead.” It’s essentially the same thing. The Guardian

If you didn’t think it was possible to make smart glasses that look like regular glasses, welcome to 2018! Intel’s new Vaunt smart glasses really do look like normal eyeglasses. And when they’re on, the wearer sees a stream of information on what looks like a screen, but is actually being projected in the retina — and they even work with prescriptions.

Here’s what the glasses don’t have: a camera, ability to swipe a screen or push a button, LCD screen, speaker or microphone. So, unlike Google Glass or HoloLens, Intel’s approach of “less is more” means something you can wear all day.

For example, they needed to weigh under 50 grams, the batteries and electronics had to be placed so they didn’t weigh down on the nose or ears, and they had to feel like regular glasses. So, the electronics are inside two little modules in the stems of the eyeglasses, and the electronics are near the face of the frames, allowing the rest of the stems and frame to flex a bit, just like glasses. Vaunt plans to launch an “early access program” for developers later this year. The Verge

The Olympics Were Hacked During Opening Ceremonies, Did You Notice?

Before the ceremonies kicked off, the official PyeongChang 2018 website was down, visitors couldn’t access their accounts or download their tickets, and users couldn’t search for information. Even Wi-Fi service in the stadium and TV feeds in the Main Press Center were temporarily down, and it took 12 hours for the cyber response team to get operations back to normal. Perhaps some of us didn’t notice, because according to Forbes, a spokesperson for the PyeongChang games said organizers knew what happened and said this was usual during the Olympic Games.

The International Olympic Committee won’t spill the details, including who was behind the attack, until systems are sure to be secure and the investigation is complete. Some speculate the hackers could be Russian considering the IOC suspended the Russian Olympic Committee in December.

But we’ll have to wait for the post-investigation report, though it may not find enough evidence to definitely prove who the hackers were. Forbes

Will the Tesla in Space Collide With Earth?

Maybe in the next million years, but it’s nothing to worry about. SpaceX CEO Elon Musk successfully launched his Tesla into space last week with the Falcon Heavy, the most powerful rocket in the world. The car is intended to enter the elliptical orbit around the sun so it can make it to Mars, but after its launch, Musk tweeted the car overshot its trajectory and was headed to the asteroid belt.

So, actual rocket scientists found out even though the car is headed to a different trajectory, it’ll still be passing closer to Mars than the asteroid belt. But a group of five Canadian astrophysicists calculated the probability the Tesla would collide with a planet. Turns out, there’s a 6 percent chance it’ll collide with Earth in the next million years.

And although the calculations revealed several close encounters with Mars, the researchers said none of them resulted in a “physical collision.” Even Venus had a 2.5 percent chance. And overall, the researchers estimate the Tesla will last around 20 million years, and are sticking with substantial collision probabilities with Earth. Motherboard

The Pentagon’s budget request for 2019 sets up a “small launch” program for the Air Force with funding of $192.5 million over five years, to have more launch capabilities and access to space. But it doesn’t want to buy rockets. The Air Force wants to buy launch services from the private sector to launch small satellites, and forecasts $47.6 million for 2019 alone. The small launch program would carry up to 8,000 lbs, compared to the SpaceX Falcon Heavy 9, which can carry 50,265 lbs in low orbit.

Here’s the thing: The military sees satellites in space as targets of enemies, and one way to fight off potential attacks is to make satellites “less attractive” targets by launching new ones into orbit within minutes or hours of an attack.

The Pentagon has already experimented with new launch technology and has a program supporting large satellites, and companies like Virgin Orbit and Stratolaunch have services specifically for the national security market. Aircraft that carry multiple launch vehicles allow the Air Force to reorganize how it sends small satellites up at once, and funding a specific program for small launch provides flexibility as new launch service providers pop up. SpaceNews