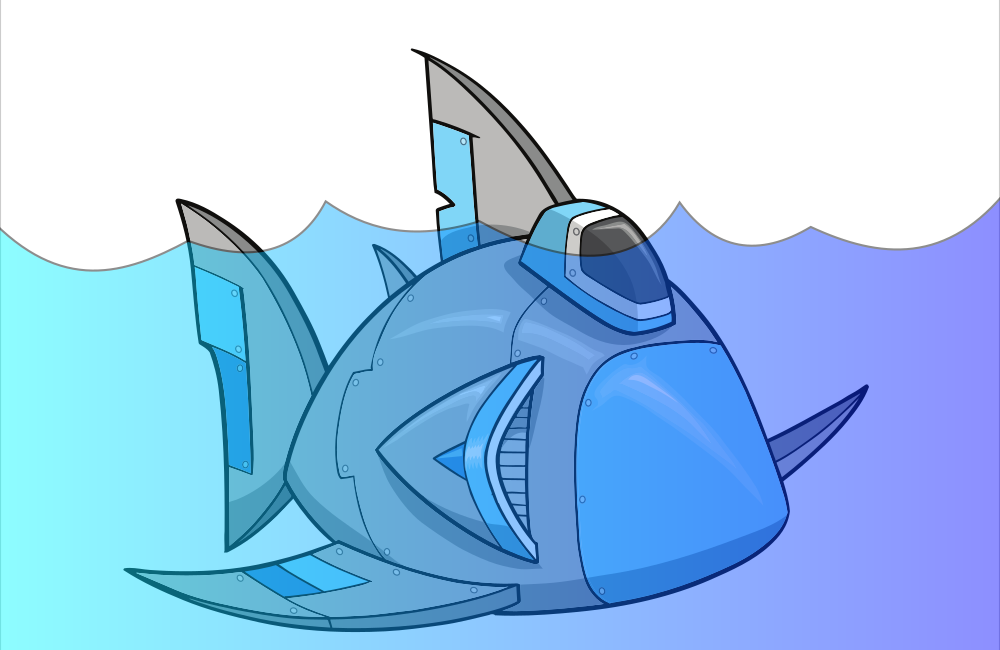 Meet SoFi, the “soft robotic fish” developed by scientists at the MIT Computer Science and Artificial Intelligence Lab. SoFi is a foot-and-a-half long and looks and swims like a fish. She has a finned body, can swim up to 60 feet below the surface and has a battery life of 45 minutes. She’s not connected to a boat, isn’t a big vehicle or submersible, and doesn’t have a noisy propeller — so she doesn’t seem to bother natural marine life. She swims alongside real fish and is comparatively inexpensive to make, offering biologists a “fish’s-eye view” of the ocean’s ecosystems and interactions.

SoFi had her first ocean swim on a coral reef outside Fiji. Building her meant waterproofing, buoyancy control, testing weight distributions and figuring out a way to share information underwater. Her head is equipped with a camera, two-way hydrophone battery, environmental sensors, and operating and communication systems. Her accompanied diver commands her with a “souped-up” Super Nintendo controller.

To communicate, the researchers had to build their own language via coded messages on high-pitched sound waves. More research is required, but robotic fish may be the future of better understanding and protecting marine life. The New York Times

The Defense Advanced Research Projects Agency is exploring the use of machine learning to change the way complex aircraft components and engineering systems are designed. It may sound far fetched, but AI is already used to imagine things for us, like outfits based on learning a user’s fashion sense. It does this with generative adversarial network, or GAN, which consists of two neural networks trained with particular data. One network generates synthetic examples to fool the other network into thinking they came from the original dataset, so the first network gets better at creating realistic data.

This new DARPA project wants AI to think of new components by combining advances in machine learning with the fundamentals of math and engineering. DARPA is funding a project called D-FOCUS from researchers at the University of Wisconsin-Madison and PARC, the research company out of Xerox. D-FOCUS won’t create new designs from scratch but instead provide alternatives to existing designs. If the design process is automated, human designers can look into design options and compare them to each other before committing to an expensive plan.

DARPA is also looking for software that can come up with designs for machines that can solve simple engineering problems, so D-FOCUS can also explore potential design concepts that solve them. And even if AI comes up with impractical ideas, it can get designers thinking of innovative designs and concepts. MIT Technology Review

Some lawmakers hope so. In 2010, members of Congress said Facebook allowed app developers to take personal information from users and give the data to marketers, claiming breaches of consumer privacy and calling for privacy legislation. Nothing passed, but with Facebook’s recent privacy mishap with data firm Cambridge Analytica, legislators are again threatening to act.

Facebook said in 2015 Cambridge Analytica got its hands on names, “likes” and personal information from at least 30 million Facebook users, and used the information to create profiles of voters. Researchers from the data firm worked on the Trump campaign, so it’s a bit of a tangled web. People are mad at Facebook for this privacy breach, losing trust in the social media giant’s ability to protect user data. Mark Zuckerberg himself said he’d like to see ads transparency regulation, and the Senate Commerce Committee invited him to testify on Capitol Hill.

This breach also sparked conversation about how to protect citizens in a new digital age. There are rules governing financial transactions and health data, but nothing requiring tech and advertising giants to obtain user’s permission every time they collect data on their online activity, or sell it to a third party. The Washington Post

In 1990, thieves broke into the Isabella Stewart Gardner Museum in Boston disguised as police officers. They tied up the museum security guards and stole $500 million worth of art from the museum’s walls. The case is known as the “largest unsolved art heist in history,” as no arrests were made and the spaces where the 13 artworks hung have remained empty — until now.

Thanks to the power of AR and Apple’s ARKit, a team of nine technologists at Cuseum, a group bringing AR to museums, recreated two of the 13 stolen artworks. The project is not technically sanctioned by the museum, but the team is calling its project Hacking the Heist. The ARKit build runs on latest iOS still only available to developers, so as soon as Apple releases the new version of iOS to the public, museum visitors can download the app and see the virtually restored paintings through their own Apple devices.

In the meantime, the technologists hope to lend some iPads to the museum so visitors can see the work if they don’t have the app. It’s still a proof of concept right now, but the team intends to work with the museum to create a project open to the public. Motherboard

The ionosphere is the layer of the Earth’s atmosphere that has a high concentration of ions and free electrons, and reflects radio waves. When the Falcon 9 launched in August, it cut a 559-mile hole in the plasma of the ionosphere that lasted up to three hours, comparable to a localized magnetic storm. And while the hole itself didn’t disrupt much, frequent and more powerful launches like these could significantly affect GPS navigation.

In the case of the Falcon 9 launch, the hole was inadvertently caused by the rocket’s light payload. Most rockets have a curved trajectory to reduce the effect of gravity, but SpaceX’s rocket carried such a light payload, it took a more vertical path.

And as dropping a rock straight down in the water differs from skipping the rock, this nearly-vertical launch created a much bigger splash. So, rocket operators will have to be more mindful of their launches and its impact on phones and cars on Earth. Engadget