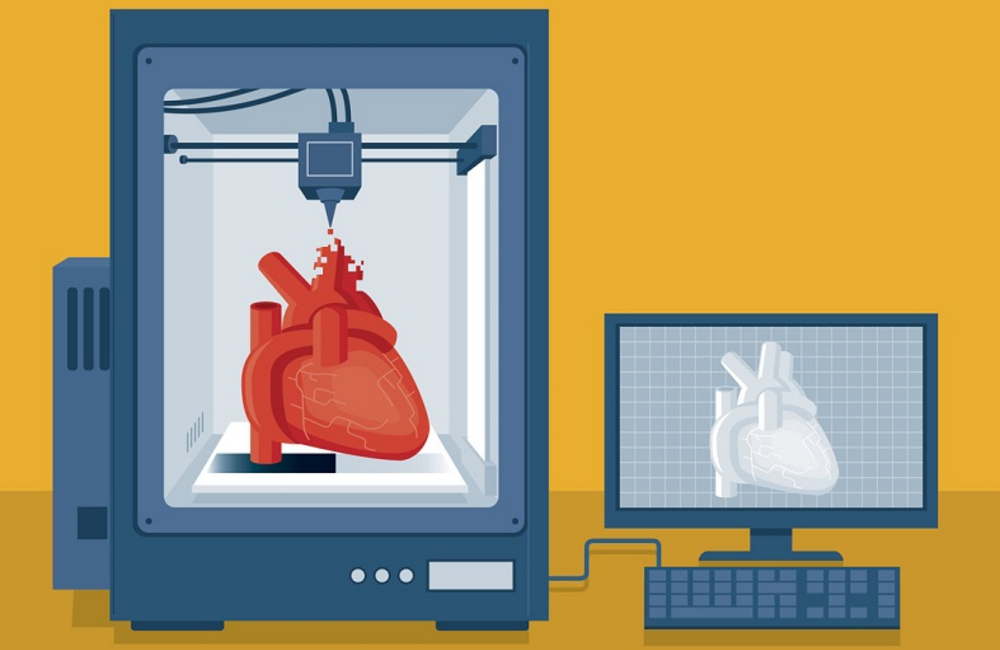 Drop a piece of paper into water and watch it grow into an origami swan. See a pipe damaged by freezing repair itself when the sun hits it. Bring home some new furniture in a flat box and let it put itself together — no Allen wrench required!

These are some of the possibilities of 4D printing, so called because it adds the fourth dimension — time — to 3D printing, but also known as self-assembly. It’s an innovative new approach to additive manufacturing that allows complex structures to react when exposed to heat, water, light, electrical current or other external forces, forming into pre-determined shapes.

Possible uses for 4D printing are being explored in medicine, construction, manufacturing and other areas. Small cardiac stents in an artery could open in response to body heat, or medicine capsules could open when an infection raises body temperature. Potholes in roads could repair themselves when exposed to heat. Cellphones could assemble themselves without humans or machine putting them together.

Arthur C. Clarke’s oft-quoted third law that, "Any sufficiently advanced technology is indistinguishable from magic," has always made sense, because a lot of technology seems to work like magic, especially if you’re not familiar with it (imagine explaining a smartphone to someone from the 1970s, for instance). But technology that looks like magic is something of another level. Self-repairing car fenders won’t be on the streets any time soon, but research done at government and university labs suggests they’re not that far off, either.

It all starts with the materials, which have varied depending on the research.

Scientists at Lawrence Livermore National Laboratory, in one example, have 3D-printed materials that can recover their shape by inserting gas-filled “micro-balloons” into silicon ink. The resulting materials can be compressed and then, when exposed to heat, return to their original state and stay there after cooling off. The materials are flexible and stretchable, with shape memory behavior, which could be used, for instance, to create form-fitting cushioning activated by body heat in a shoe or helmet.

“The impressive part was how well the structures could recover their shape after they were reheated,” said Amanda Wu, LLNL researcher and the lead author on a paper published by Scientific Reports. “We didn’t see a distorted structure, we saw a fully recovered structure. Because the silicone network is completely crosslinked, it holds the part together, so the structure recovers its original shape in a predictable, repeatable way.”

Researchers at Singapore University of Technology and Design are using a stiff shape-memory polymer paired with a rubbery elastomer to 3D print rigid shapes that curve when heated to 45°C (113°F), creating objects such as a flower that closes, and a flat figure that grows into a dome, New Scientist reports. Harvard’s Wyss Institute for Biologically Inspired Engineering is using hydrogel ink that changes shape when exposed to water or other environmental changes. The National Institute of Science and Technology is researching 4D printing as part of its goal of a Flexible Hybrid Electronic industrial ecosystem.

The Massachusetts Institute of Technology’s Self Assembly Lab touts a wide range of 4D possibilities, including the aforementioned self-assembling phone, self-folding proteins, rapid liquid printing, a fluid-assembly chair that takes its shape in a tank of water, transformable walls, and the autonomous mass assembly of independent parts that self-select themselves while forming a complete structure.

But doing it with 4D printing adds another dimension, so to speak, to the research. It’s still a young research field with limitations — for one thing, once shapes change, they don’t change back, which could restrict what could be done with flexible robotics — and it’s not ready for commercial use yet. But it’s emerging as a strong possibility for products that are self-repairing, and therefore more sustainable.