Focus is on airborne travel — for the most part autonomous — more than ground/air hybrids.
Kevin McCaney 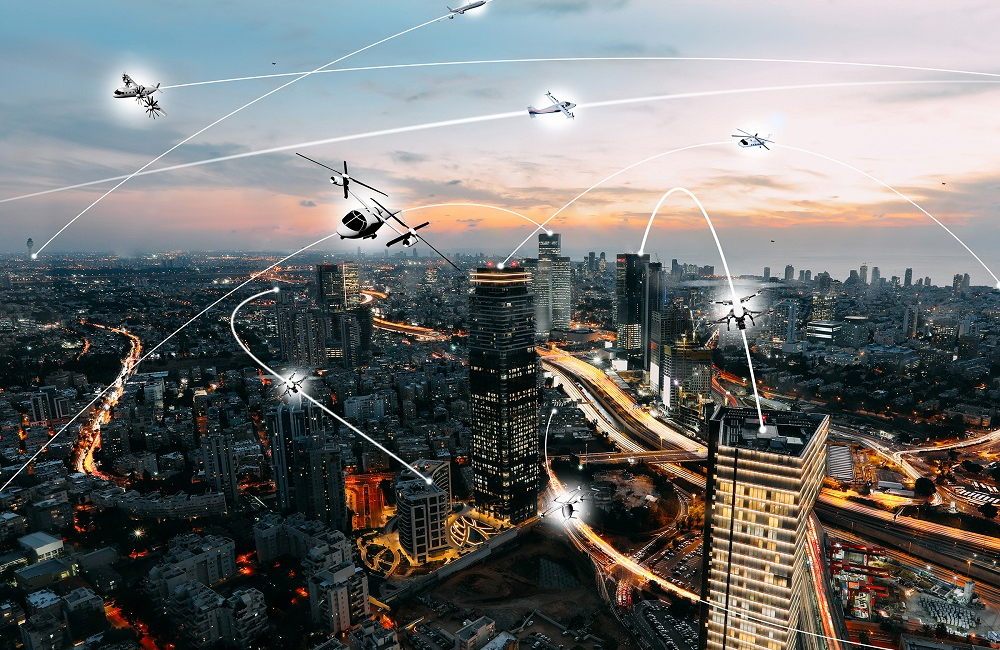 An artist’s concept of an Urban Air Mobility environment, with both manned and unmanned air vehicles. Illustration: NASA/Lillian Gipson

Fifty years ago, people had some pretty fantastic visions of the future, popularized in science fiction novels, movies and TV shows. Real life, it turns out, has actually blown the doors off many of those wild concepts.

But whatever became of flying cars?

They were a staple of every model of the future, from the happy suburban life of the Jetsons to the dystopia of “Blade Runner,” and just about everything in between. As it happened, flying cars have proved to be more difficult than other technological advances. For one thing, they wouldn’t live in a virtual world, like many software advances. Like self-driving cars, they’d have to deal with traffic, but they’d have to deal with it in airspace not so easily governed by roads, signals and signs. Packing two different engines and providing power for a vehicle that could both ride the roads and the skies was another challenge.

Previous efforts by the U.S. military and others to build a hybrid ground-and-air vehicle never quite got off the ground. A few companies have versions of hybrid car/aircraft in development, and one, Dutch company PAL-V, this year unveiled the Liberty, which it says is the first commercially available flying car. But the three-wheeled vehicle has its own limitations, and goes for about $600,000, so your neighbor won’t have one in the driveway anytime soon.

The dream nevertheless lives on, currently in terms of flying taxis and delivery vehicles, as well as government uses for the technology. Both the Army and NASA have entered into research agreements with Uber to develop technologies that would both further the military’s pursuit of better vertical takeoff and landing technologies while letting Uber and other commercial interests get closer to airborne delivery and ride-sharing operations. For now, at least, their focus is on airborne travel — for the most part autonomous — more than ground/air hybrids.

The Army Research Laboratory and Uber will explore new rotor technology, specifically stacked co-rotating rotors — that is, have two propeller systems, one on top of the other and both turning in the same direction. Stacked co-rotating rotors, which to date haven’t been used in aircraft, would be quieter and better performing than current rotor systems, the Army said in a release.

For the Army, the work is expected to develop more silent and efficient VTOL aircraft for the service’s next generation of unmanned aircraft. Uber hopes more quiet rotors will “help create the world’s first urban aviation rideshare network," said Eric Allison, head of Uber Elevate. Uber also is collaborating on the project with Launchpoint Technologies, which is working on new electric motors to support the stacked rotor model. Quieter engines would be an obvious benefit both in military operations and in city skies filled with package- and passenger-carrying drones.

City (Traffic) in the Clouds

Uber also is contributing with other industry and academic organizations to NASA’s Urban Air Mobility project, which envisions an air transportation ecosystem allowing for “everything from small package delivery drones to passenger-carrying air taxis operat[ing] over populated areas, from small towns to the largest cities,” according to NASA. For starters, NASA, with help from Uber, is planning to test a small passenger-carrying aircraft around Dallas Fort Worth International Airport.

“The convergence of technologies, and new business models enabled by the digital revolution, is making it possible to explore this new way for people and cargo to move within our cities,” said Jaiwon Shin, NASA’s associate administrator for aeronautics research.

The idea is to get to the point where deliveries from Amazon and other companies, plus local trips by Uber or other services are a common thing. The space agency is involved with this close-to-the-ground plan because of the relationships it has already established with industry, academia and the Federal Aviation Administration, providing a large, diverse set of partners, the agency said.

“NASA has the knowledge and the expertise to help make urban air mobility happen,” Shin said last year. “We plan to conduct the research and development, and test the concepts and technologies that establish feasibility and help set the requirements. Those requirements then serve to make using autonomous vehicles, electric propulsion, and high-density airspace operations in the urban environment safe, efficient and economically viable.”

NASA admits UAM is still a long way off, but says new technologies to make it happen are on the horizon.

“Traveling by personal air vehicle will become commonplace in the future,” said NASA engineer Davis Hackenberg, “and NASA wants to help the UAM community to make it happen.”