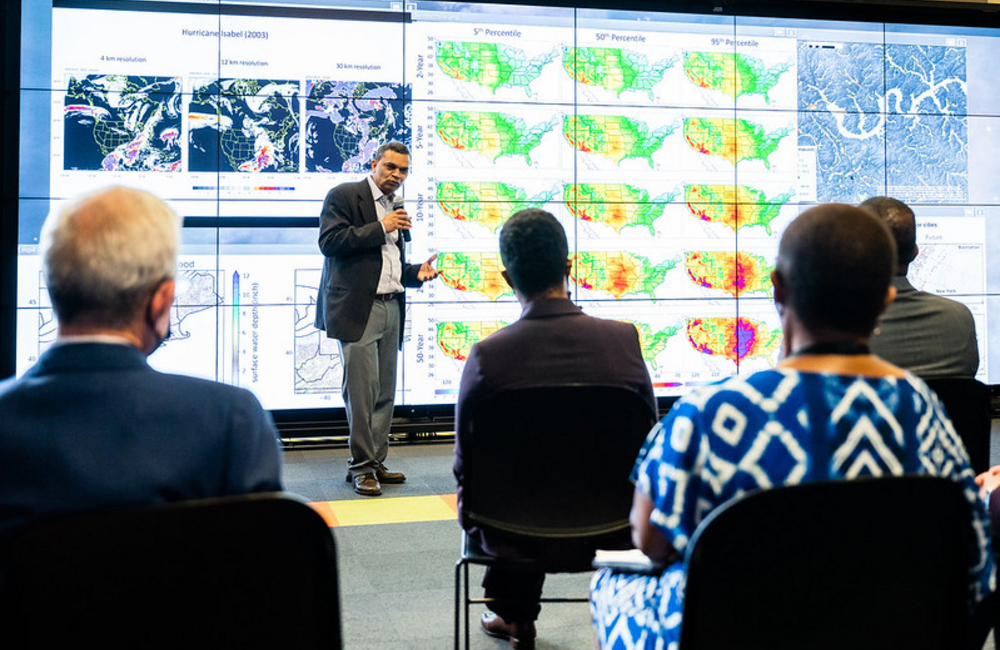 Amid the pressing need to address climate change and extreme weather events, data has been a critical component to furthering resilience efforts. The Department of Energy's Argonne National Laboratory released a new digital portal last week that is helping share and visualize actionable climate data to communities across the country.

The lab created the portal, called Climate Risk and Resilience (ClimRR), in collaboration with the Federal Emergency Management Agency (FEMA) and AT&T. The projections are based on some of the most sophisticated methodologies available today, and will provide state, local, tribal and territorial communities with access to localized data about future climate risks.

“Argonne is excited to launch this cutting-edge climate portal with AT&T and FEMA, which will give communities across the country free and open access to actionable climate data,” said Argonne Director Paul Kearns. “Harnessing the power of our supercomputers, we are making cutting-edge climate data available to the public sector and local planning officials to help them better understand local climate-change risks and take the needed actions to become more climate resilient.”

The portal launched with data on shifting temperature, precipitation, wind and drought conditions. Wildfire, flooding and additional risks will be added in the coming months.

The tool is designed to be useful and accessible for a variety of end users, including those who don’t have a background in climate science. One of the intended audiences is the general public, so that people can understand what future climate conditions might look like in their area or in an area they are moving to.

Another intended audience for the tool is the emergency management community, including federal agencies such as FEMA as well state, local and tribal emergency managers. These managers often don’t have a background in climate science, and the portal is designed to provide useful metrics for adaptation efforts.

“We want to be able to provide information so they can think, ‘Alright, how are we going to have to maybe dedicate new resources to cooling shelters, or distributing ice cold water or bottled water in the future due to heat events?’" said Thomas Wall, Engineering and Applied Resilience Program Lead in Argonne’s Center for Climate Resilience and Decision Science.

The portal also allows users to overlay climate projections with community and infrastructure information sourced from the Resilience Analysis and Planning Tool (RAPT). Combining the ClimRR and RAPT data will help communities mitigate climate risks that have the potential to impact vulnerable populations and critical infrastructure.

Infrastructure owners and operators are another intended audience for the ClimRR tool. Many climate projections include information such as average temperature, but this data isn’t always actionable for general end users. In response to feedback from a power utility, Argonne included a metric for heating degree days and cooling degree days, which predicts shifting demands for heating and cooling buildings. This information will help infrastructure owners plan for future power loads.

Argonne plans to continue updating the tool in response to feedback from its users.

“This is a living tool, this is something that we plan to improve upon and expand as we go into the future,” Wall said. “The application is actually beginning to inform some of the approach to the science.”

The ClimRR data is also available for download, enabling technical audiences to apply their own GIS software or mapping tools. The ClimRR model is built with peer-reviewed climate datasets produced through the dynamical downscaling method, which simulates the different processes affecting the atmosphere, ocean and land.

Argonne’s Center for Climate Resilience and Decision Science originally produced the climate projections in ClimRR for AT&T's own adaptation efforts. Through this collaboration, AT&T has made the data used in ClimRR publicly available.

“While fortifying the AT&T network against climate change is critical for the millions of people who rely on the connectivity we provide, resiliency can’t be built in a vacuum,” said Charlene Lake, chief sustainability officer and SVP-Corporate Social Responsibility at AT&T. “Our world is interdependent. We want other organizations and communities to see where they’re potentially vulnerable to climate change and take steps to become resilient.”