The directorate's IT modernization efforts are still on schedule despite challenges amid the pandemic.
Kate Macri 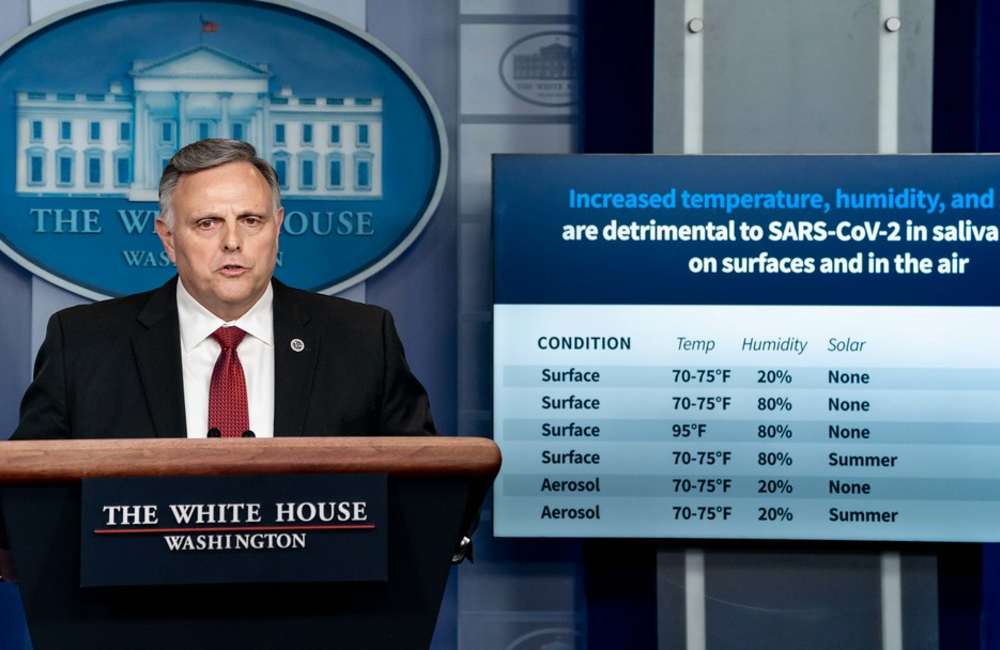 William Bryan, Department of Homeland Security Under Secretary for Science and Technology addresses his remarks at a coronavirus update briefing April 23, 2020, at the White House. Photo Credit: White House

When the Department of Homeland Security’s Science and Technology Directorate shifted to mass telework in March, job satisfaction jumped 30%. Now, the agency expects at least half of its workforce to telework permanently — even when federal employees start going back to a physical office in the future.

William Bryan, the senior official performing the duties of the under secretary for DHS S&T, said he wanted work to be enjoyable and not burdensome for his employees working remotely.

“There are so many factors in the lives of my coworkers I can't control, like daycares being open, and this drove me to create the most flexible work environment to allow them to do their job while tending to those other challenges they're facing,” Bryan told GovernmentCIO Media & Research. “I didn't want the job to be the heaviest weight they were carrying.”

In fact, shifting to telework posed very few challenges for the S&T Directorate. Bryan said he wasn’t fully on board with the idea of teleworking before the pandemic, but now he’s a “believer” because of how smoothly it was for S&T to transition. S&T also resolved early IT challenges fairly quickly, and hasn’t faced any IT problems since.

“There were a lot of processes that needed to be modified,” Bryan said. “One example was a help desk. How do you fix a broken computer when you can't walk over to their desk? Now they're having to readjust that and walk me through with them over the phone. Second is deployment and recovery of assets. Your computer now has to be delivered to your home. We also had to develop new processes to make sure we could appropriately cache all our credentials, and also we had to expand on our administrative support side of IT on shipping and all those requests. We're trying to be so efficient.”

S&T’s IT modernization efforts are still on schedule, despite IT professionals working from home.

“We have a structured IT modernization schedule and that has not changed. Currently we're migrating our systems to the cloud as part of our ongoing cloud first strategy,” he said. “Our staff knows what they need to get done, and they're doing it, they're just doing it from home. The IT issues and concerns we had from the beginning have not shown themselves.”

The directorate saw a jump in engagement and collaboration, especially with the private sector. By Bryan’s estimates, S&T’s effectiveness and collaboration dramatically improved during the pandemic, and attendance to S&T’s tech workshops and industry days — now virtual — increased tenfold.

“What went really well in the work to telework, the shift to virtual engagements has really shifted participation,” Bryan said. “We had a Silicon Valley Innovative Program (SVIP) industry day and normally that garners about 50 to 60 people, and we had 570 participants from around the world that never would have been able to attend if we'd done it in person. Embracing this type of environment is not new for industry; for the government it's new.”

S&T’s transition to telework also benefited from open communication with other DHS officials.

“We've been directed to collaborate as much as we can with [the DHS Countering Weapons of Mass Destruction Office]. ... We're also taking guidance from DHS and the executive branch at large,” Bryan said. “I'm constantly calling other folks across the organization.”

Due to the success of S&T’s transition to telework, Bryan said he is in no rush to return to physical offices. From a productivity and job satisfaction standpoint, operations have been smooth. The directorate anticipates no additional IT impediments now that employees are settled into remote work and migrating all operations to the cloud.

“I have a workforce that travels in from five different states, and none of those states are created equal. So for me to say, 'Here's what we're going to do,' will have an adverse effect on somebody somewhere,” Bryan told GovernmentCIO Media & Research. “It's going to look very different [when we go back to an office]. We're going to see an environment where we're going to be at least 50% teleworking, maybe even more. We're not going to compromise safety by rushing back to the office just for the sake of doing so.”