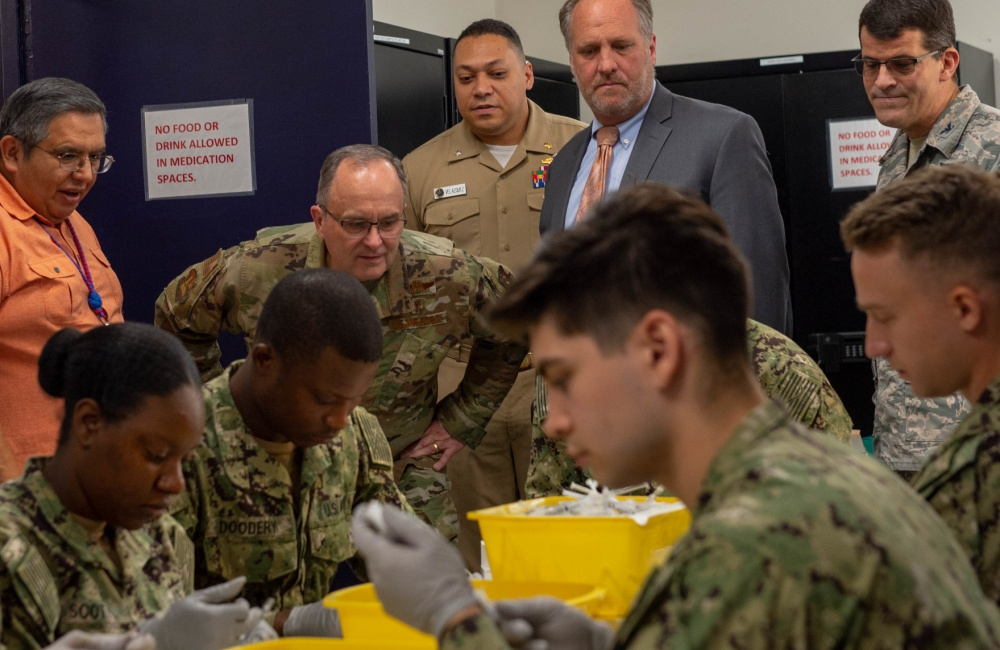 Assistant Secretary of Defense for Health Affairs Thomas McCaffery proposed to the committee a $33.1 billion budget for the Defense Health Program in fiscal year 2021, marking a $1 billion increase from FY2020. The proposed budget, McCaffery said, will help maintain a number of efforts DHA and DOD as a whole are making to drive efficiencies into their operations and to improve care.

“Some of the significant reforms are the following: consolidated administration and management of our military hospitals and clinics under the … Defense Health Agency, rightsizing our military medical infrastructure to focus on readiness within our direct care system and finally optimizing the size and composition of the military medical force to best meet our readiness mission,” McCaffery said, emphasizing that deploying the joint electronic health record — MHS GENESIS — and advancing research are key drivers behind these initiatives.

Consolidation has also been a key driver across the Military Health System this past year. DHA absorbed all medical administrative and management responsibilities of the individual service branches in October, launched four markets to deliver more tightly run care early this year and has advanced in MHS GENESIS deployment through Wave Travis in September and soon with Wave Nellis this summer.

“The medical staff at Travis Air Force Base demonstrated competence in MHS GENESIS on day one when a patient arrived at the emergency room in sudden cardiac arrest two hours before the official go-live,” Tinston said. “The team had a choice. They chose MHS GENESIS, and that was the right decision. With every deployment, we hone our process and improve capability delivery.”

Committee members were critical of DHA’s activities, questioning why it needs more budgeting money when the agency had yet to achieve its results. The Army and Air Force surgeon generals, however, emphasized that DHA is in a moment of transition — and that successful transition is critical for achieving successes and maintaining stable care for military health beneficiaries.

“We need to transition before we transform,” said Air Force Surgeon General Dorothy Hogg. “We need to help them do this mission. I would ask that we not add additional system changes until the Defense Health Agency is standing on their own.”

“In order to get it right, the focus should be on the MTF transitions,” added Army Surgeon General Thomas Dingle. “It starts with a step to stand up that headquarters. [DHA] headquarters is not operationally running, and it will continue to require that direct support. After you get that headquarters stood up, then you can start transition to military medical treatment facilities, and then we should also be focusing in that transition in that electronic health record.”

DHA Director Gen. Ronald Place reported that the rollout of the DHA MTF markets — a challenge because of the complexities of absorbing each of the services under its wing — is overall successful.

“In D.C., for example, [we were able] to utilize all the resources of each of the facilities to include the staff to align them more appropriately to the location where they can best provide health care,” Place said. “Similarly, we’re able to use the particular location, whether you’re enrolled to this particular military medical treatment facility or another, to move patients around, to achieve the best quality of care, so the standardization within the market has been a success.”

The officials also said they will focus on working closely with medical staff throughout these transitions, such as with the MHS GENESIS rollout, to ensure minimal disruptions in workflows and care.

“You have to work to deliver the right capability in the record, which we’ve done,” Tinston said of MHS GENESIS. “You then have to customize that record to meet the physical plant of the facilities that you’re supporting, and you have to train people to be effective clinically with the new workflows that you’ve introduced. So it’s not just to turn it on and let everyone start using it. You have to be very deliberate about bringing people up to speed so that they can be effective. We don’t compromise the health care delivery as we deploy MHS GENESIS.”