2022 National Defense Strategy: These are the Pentagon's Tech Priorities Skip to main content

2022 National Defense Strategy: These are the Pentagon's Tech Priorities 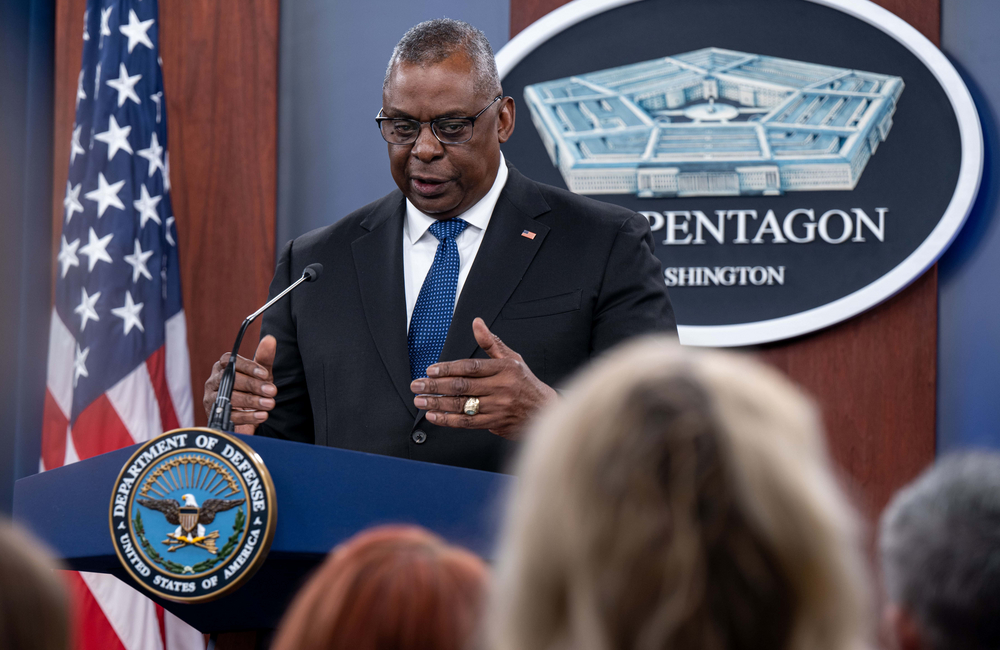 "We are aligning the department's operations, activities and investments across all theaters, across the full spectrum of conflict and across all domains, especially in space and cyberspace," Austin said. "In space, we are working to field resilient satellite constellations to dissuade any adversary from testing our will and to ensure that we'll prevail if they try. In the cyber realm, we are boosting our resilience and enhancing our capabilities to conduct military operations."

The unclassified strategy comes as the war in Ukraine escalates and the threats from China to seize Taiwan grow. The strategy names China as the "most consequential competitor" for the next decade and calls Russia an "acute threat."

"We are strengthening the 21st century combat-credible U.S. military that will deter aggression that threatens the interest of the United States or our allies and partners," Austin said. "That means a military ready to tackle the full range of threats out there, harnessing the American spirit of innovation to meet the complexities of today's world."

What this strategy means for IT modernization and emerging technology initiatives across DOD is revealed in the following key areas.

As adversaries and competitors invest heavily in artificial intelligence (AI) and AI-supported capabilities, the NDS embraces AI as one of the capabilities that will allow joint forces to maintain the edge in a digitally competitive environment.

The U.S. Air Force is targeting AI readiness by 2025 and plans to become AI-competitive by 2027, according to Chief Data and AI Officer Maj. Gen. John Olson.

“We need to find a way to use the power of ML and AI to accelerate our ability to plan for and execute operations [for JADC2] very quickly,” said Air Force Deputy CIO Winston Beauchamp in June. “That means communicating very quickly between platforms. All of these things are very complex and time sensitive. Having the ability to communicate in that way requires seamless integration across networks and services. This is not something you're able to do with separate networks, you need high performing networks and seamless interfaces.”

AI leaders at the Pentagon believe AI will play an integral role in the Joint All-Domain Command-and-Control (JADC2) concept, and they want industry to innovate in AI as fast as possible.

“The pace of innovation taking pace [with AI, RPA] — it’s not slowing down, it’s accelerating,” said Douglas Bush, assistant secretary for logistics and technology at the Army, during the National Defense Industry Association’s JADC2 Symposium. “How do we make sure JADC2 elements are continuously open to state-of-the-art technologies?"

Tackling data management is one of the first steps to ensuring DOD is adequately equipped for future fights, according to the NDS.

“Because Joint Forces operations increasingly rely on data-driven technologies and integration of diverse data sources, the Department will implement institutional reforms that integrate our data, software and artificial intelligence efforts and speed their delivery to the warfighter,” the strategy said.

The Pentagon's new Chief Digital and AI Officer Craig Martell said data will be the foundation of all DOD AI efforts.

“Data is going to help battlefield decisions. How do we make AI model decisions at the tactical edge in a contested environment where we have very little access to the cloud? These are really important questions to drive the AI value we need,” Martell said in September.

Maj. Gen. Olson believes that data is one of the most important ingredients for successful digital modernization.

“Data is like the new plutonium,” Olson said at a GovConWire event earlier this year. “Let's look at JADC2 — the purpose is to sense, make sense and act at all levels across the service to provide a decision advantage. The party that has that decision advantage and moves with speed, accuracy and deliberate effect — that will carry the day, so ultimately that's fundamentally important. The Air Force's advanced battle management system is our primary contribution to JADC2. That's an Air Force and Space Force activity. When we look at the purpose of that, its core is data.”

The NDS considers software modernization a critical component to maintaining joint force operations and readiness in theater. As noted in the earlier discussion on data, "the department will implement institutional reforms that integrate our data, software and artificial intelligence efforts and speed their delivery to the warfighter."

"Software and the department’s ability to rapidly deliver resilient software-based innovations are increasingly critical component of mission successes and a key driver of military advantage,” Metz said during AFCEA TechNet Cyber in Baltimore.

DOD will make investments to cultivate the necessary workforce that are so critical to supporting and executing many of these initiatives.

“People execute the strategy. To recruit and retain the most talented Americans, we must change our institutional culture and reform how we do business,” the strategy said.

For the Marine Corps, talent management is already one of the service’s highest priorities from an investment standpoint and building a modern workforce is critical to everyday and future operations for the forces.

"There's no doubt everything starts with talent management," Lt. Gen. Matthew Glavy, deputy commandant for information, said at the Navy IT Transformation Forum. "One of the high priorities of the commandant is right now, as he looks at force design, and continuing and executing the transformation of the force, as he looks at talent management, and how we're going to make sure our best people are put in to match their talents in the most important positions ... how we're going to train and educate them to execute all the warfighting functions are obviously critical to what we need to do every day."

Workforce is the first step to ensuring the Defense Department is “prepared” for “the next fight,” according to Pentagon tech leadership, then cultivating the right culture.

“I think the No. 1 problem is culture,” Martell said in June. “I think the other things will follow if we get the culture right. The main obstacle is a culture accepting of change while maintaining our mission goals.”

Zero trust will be a major DOD priority in 2023 as foreign adversaries such as China and Russia aim to develop "operational, logistical and informational advantages" against the U.S. in the cyber domain, according to the NDS. A firm cybersecurity strategy rooted in zero trust will also be crucial to the successful implementation of JADC2.

DOD plans to build up cyber resilience in 2023 with zero trust architecture, according to the NDS. The NDS aligns with comments from DOD cyber leaders about the importance of zero trust implementation over the past year.

“When dealing with peer competitors, we have to assume things are compromised," he said during a Potomac Officers Club event. "That particular policy or set of policies is essential to the way forward.”

The Defense Information Systems Agency (DISA) aims to complete its Thunderdome zero trust prototype with Booz Allen Hamilton for its classified and unclassified networks — SIPRNet and NIPRNet — by January 2023, setting the cybersecurity tone for DOD's implementation of the NDS.